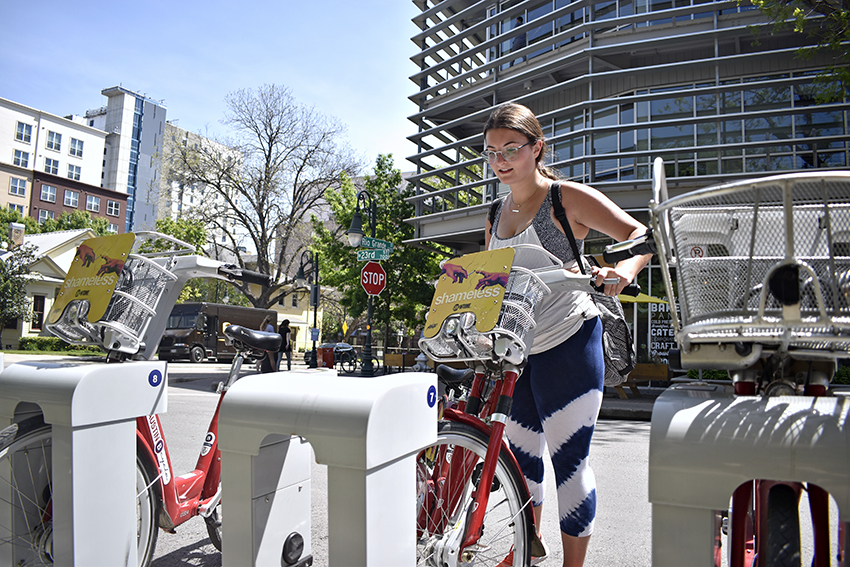 While Austin B-cycle, the City’s bike share program, has seen a drastic decrease in use since dockless scooters and bikes were introduced across the city, ridership on UT’s campus has not seen this same trend.

Elliott McFadden, executive director of Austin B-cycle, said UT students make up around two-thirds of the nonprofit’s total ridership. Last spring, over 134,000 trips were taken at the 11 stations around campus, and B-cycle expects to reach 100,000 trips in the fall, McFadden said.

“There is a little bit of a decrease, but not the sort of impact we are seeing in our downtown system,” McFadden said. “We are finding that, among our existing riders, they are riding as much as they were in the spring.”

After B-cycle launched on campus in February, the nonprofit entered an 18-month partnership with UT and the City of Austin to give students access to free rides for up to one hour. McFadden said because of this, many students still opt for B-cycles over dockless scooters.

“As a former UT student, I know that watching your penny day to day is a big deal,” McFadden said. “If you’re riding a scooter every day, that adds up.”

Mathematics freshman An Tran said he has used both B-cycles and dockless scooters to travel around Austin.

“The bikes are convenient when there’s a rack nearby, but if you are going to somewhere without a rack it’s much easier to use a scooter,” Tran said. “Sometimes the racks are full, so you can’t return the bike when you need to.”

McFadden said these docked locations prevent riders from needing to search for a B-cycle.

Nursing sophomore Matthew Tran said B-cycles provide him with a quicker way to get to class.

“There is a B-cycle station right near my apartment in West Campus, so it’s super convenient for me,” Matthew said. “I get to go to class in five minutes instead of walking 20 minutes to the nursing building.”

When B-cycle’s partnership with the University ends in August, either UT will cover the cost to keep the stations free, or students will start paying per ride, McFadden said.

“Right now the University isn’t paying anything and the students are getting the benefit of free access,” McFadden said. “That’s obviously something that as a concept is fine, but that’s not a long-term financially sustainable thing.”