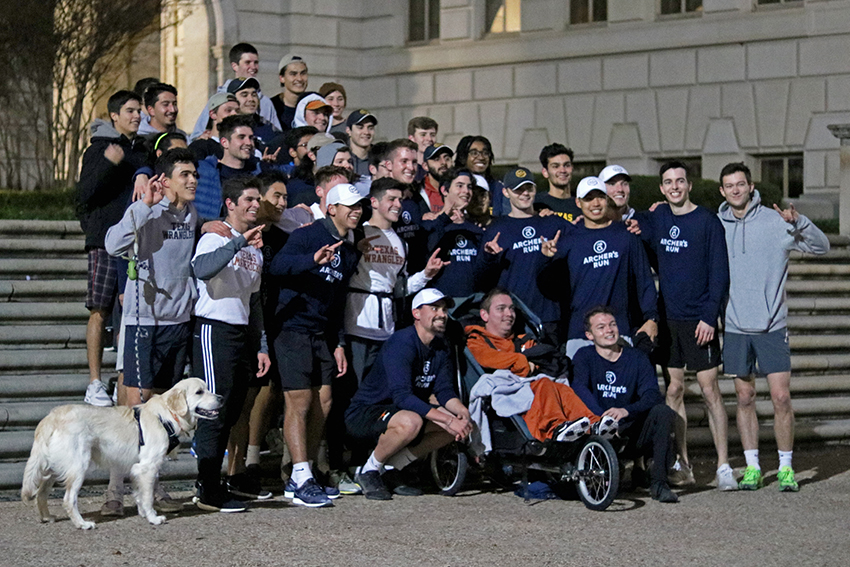 Born with cerebral palsy, a disorder of mobility and muscle tone, Archer Hadley was unable to participate in the Texas Wranglers’ physically intensive new member program, the Texas Mavericks.

The three pillars of the Wranglers are scholarship, leadership and athletic ability. Because Hadley is unable to join his fellow Wranglers in their traditional athletic activities, the organization brought Hadley on as an “honorary Wrangler.”

On Saturday, the Wranglers hosted an event called Archer’s Run to incorporate Hadley into the pillar of athletic ability. The run raised money for Archer’s Challenge, a nonprofit founded by Hadley with the goal of making life more accessible to people with disabilities. The nonprofit plans to raise $150,000 by the end of the year.

“We were thinking … of ideas and someone thought, ‘What if we were to push him a long distance to raise money for a good cause?’” said Wranglers member James Dial, a mechanical engineering senior. “Athletic ability isn’t just about physical ability. It’s also about mental toughness, which is something Archer displays a ton.”

Members of the organization ran from the Tower of the Americas in San Antonio to the Capitol in Austin, where they invited everyone to join them in running the last mile to the UT Tower.

Hadley said he wanted to make an impact on the community, but he also had a personal goal — to prove he could earn the right to wear what the Wranglers call “black and gold.” These are black shirts with gold letters that say “Texas Wranglers” and are earned by displaying that you’ve gone through the tough initiation process.

“I feel like doing this is kind of my Maverick experience,” Hadley said. “My body is going to be pushed to a lot of different limits.”

From 4 a.m. to 6 p.m., 32 members of the Wranglers rotated in and out, pushing Hadley in his jogger. Anthropology senior Riley Derby, who was in the first rotation at 4 a.m., gave him the energy for the rest of the day, Hadley said.

Derby said even though Hadley was cold and tired, his excitement motivated Derby to keep running. He ran with Hadley for 13 miles.

“When somebody was struggling running, they’d talk with Archer and be like, ‘How are you doing?’ and he was just so excited,” Derby said. “He was just super up all day long, and he was always positive.”

When they made it to the Tower, everyone surrounded Hadley. One of the Wranglers yelled, “Who thinks Archer earned the right to wear the black and gold?”

The group of Wranglers cheered as they handed Hadley his black shirt with gold lettering that symbolizes a Wrangler’s blood, sweat and tears.

“This was kind of my Maverick semester all in one day,” Hadley said. “I’m really proud of it, and I’m really, really proud of this group of guys; that they would just come around an idea and so selflessly pursue it … Because of all of that, I’m really honored to be a part of this brotherhood.”