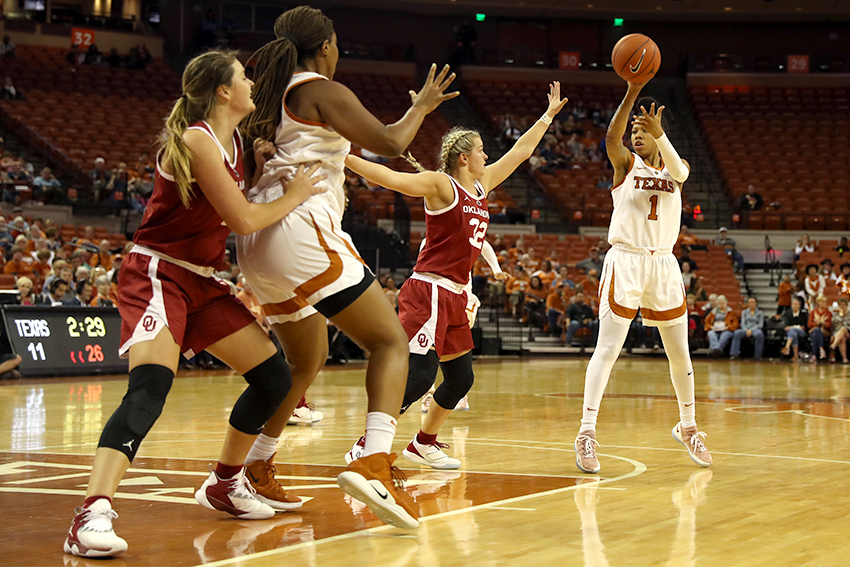 Wednesday night’s game felt every bit like a typical Texas-Oklahoma showdown from the opening tip: chaotic.

The undersized underdog Sooners jumped out to an early lead, which they maintained for the entirety of the first quarter, putting Karen Aston’s squad on yet another upset watch.

Behind some head-scratching calls that drew boos from an invigorated crowd and a rim that refused to open its lid for the Longhorns, this renewed edition of the Red River Rivalry had every making of an upset in the first eleven minutes.

“I thought that was a typical Texas-OU game in the sense of being really hard fought,” Texas head coach Karen Aston said. “I’m extremely proud of our team for weathering the storm of the first quarter. I knew they would come out like that, just because of the fire in playing the (Texas-OU) game.”

An aggressive Oklahoma trap defense caused three Texas turnovers in the first two minutes and resulted in the Longhorns playing a great deal of isolation ball. Guards Sug Sutton, Danni Williams and Destiny Littleton frequently found themselves trying to create space as the 11th-ranked Longhorns struggled to find any kind of rhythm in the beginning of the game and found themselves trailing 20-16 after the first quarter.

Freshman forward Charli Collier’s first experience of the rivalry was a baptism by fire, as the highly touted five-star recruit was thrown in late with the task of playing crucial minutes in the second half.

“It’s really different,” Collier said. “The physicality, the speed, it’s nothing like high school. You’ve got to be prepared for everything.”

Despite starting only one player over six feet tall, Oklahoma dominated the boards for the majority of the first half, at one point holding a 13-to-8 rebounding advantage over the Longhorns.

“We’re not very big, obviously, at any position,” Coale said. “We’ve been talking for a couple of months now about how imperative it is that we be fundamentally sound.”

It wasn’t until the second quarter that Texas established any type of rhythm, offensively or defensively. Midway through the second quarter, a 7-0 run spurred the Longhorns to their first lead of the game and the crowd livened up accordingly.

Behind a late 8-0 first half scoring run and an Oklahoma scoring drought lasting more than three minutes, Texas managed to take a 41-34 halftime lead.

The second half was a different story altogether.

At any moment during the game, you could look at the box score and see a direct relationship between the score of the game and the Longhorns’ performance on the boards. While Texas continually found itself behind the metaphorical eight ball in the first half and struggled in the rebounding category for much of it, the Longhorns imposed their will on the undersized Sooners in the final 20 minutes.

This was in large part due to the effort of guard Joyner Holmes, who added in a season-high in rebounds as part of her first double-double of the season.

Holmes, who missed a great deal of the first half of the season due to an undisclosed ankle injury, tied her season-high in minutes with 26.

“That’s probably a good max for her right now,” Aston said. “I think if we can get into this four-headed monster combination, and (Collier, White, Holmes, Aborowa) embrace it, we could continue to really grow.”

Although the Longhorns’ lead shrunk by a point in the third quarter, the Longhorns’ energy level in the second half was unmatched. Diving after loose balls, rebounding after missed free throws and hustling for second-, third-, and fourth-chance opportunities projected a newfound sense of control — something that was largely lacking in the first half.

But Oklahoma refused to capitulate its efforts on the night. A 6-2 run to open the fourth quarter drew an uneasy silence from the crowd, as fear of the worst seemed to linger in the back of the minds of Texas fans.

“It was a little bit of déjà vu,” Coale said. “We had Connecticut, the No. 1 team in the country, on the ropes too, and just couldn’t quite make the shots we needed to make in the fourth quarter.”

The game characterized everything the Texas-Oklahoma rivalry represents: mayhem.

After the score ground to a standstill at 61-59 on six straight possessions in the fourth quarter, Sutton took over, converting on a crucial and-one following an offensive rebound to put the Longhorns up by five.

On the next possession, Sutton made a layup, which signaled the Longhorns beginning to pull away, and assisted Williams on a dagger 3-pointer with 2:22 remaining.

“I would say that’s another area of growth when you talk about Sug’s decision making,” Aston said. “She made a perfect read. She got into the paint, got on two feet, drew the defense and made a very, very good decision to a wide open Danni Williams.”

The Longhorns are back in action Saturday afternoon as they take on Iowa State in Ames.