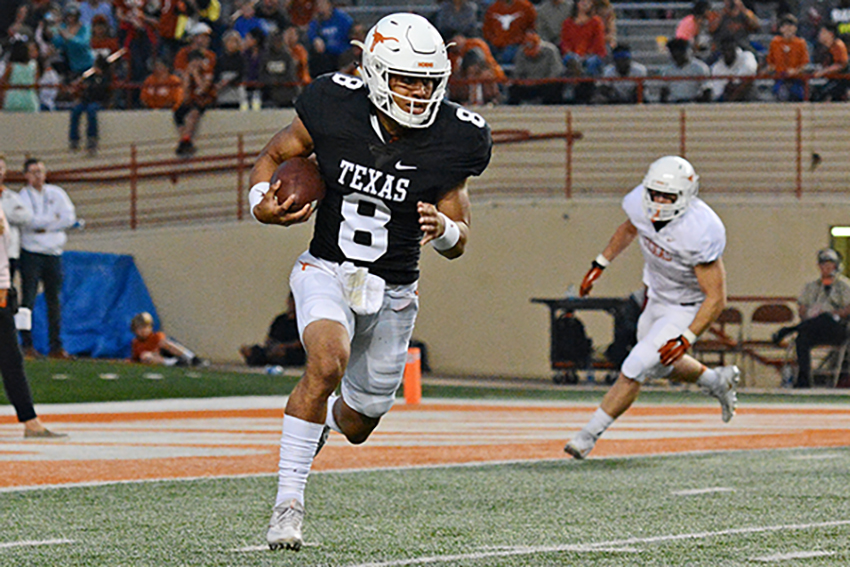 After a brief stay in the NCAA transfer database, Texas quarterback Casey Thompson has told coaches he will remain with the Longhorns, a UT spokesperson said Saturday.

Thompson, himself, assured Longhorn fans he will be coming back for his sophomore season in a series of tweets Saturday in which wrote, “I thank you for your patience….” Thompson posted tweet another shortly after, saying, “Confirmed.”

I thank you for patience….

The return of Thompson gives the Longhorns some much needed reassurance at the quarterback position after a turbulent week for Texas’ depth chart.

Chip Brown of 247Sports first reported that Thompson told coaches Wednesday night he would be staying with the team. Thompson denied the report the next morning, tweeting that he had not made a decision yet.

Rising announced Thursday he wouldn’t be returning to the University of Texas and will instead play football for the Utah Utes next season. Texas quarterback Shane Buechele also entered the transfer database this week, allowing him to speak with other programs about a potential move.

If Buechele does decide to transfer elsewhere, the Longhorns would be left with Sam Ehlinger as the starter, followed by Thompson as the likely number two and incoming freshman Roschon Johnson sitting closely behind. Texas also added three-star quarterback Sam Saxton to the roster on Thursday as a preferred walk-on.