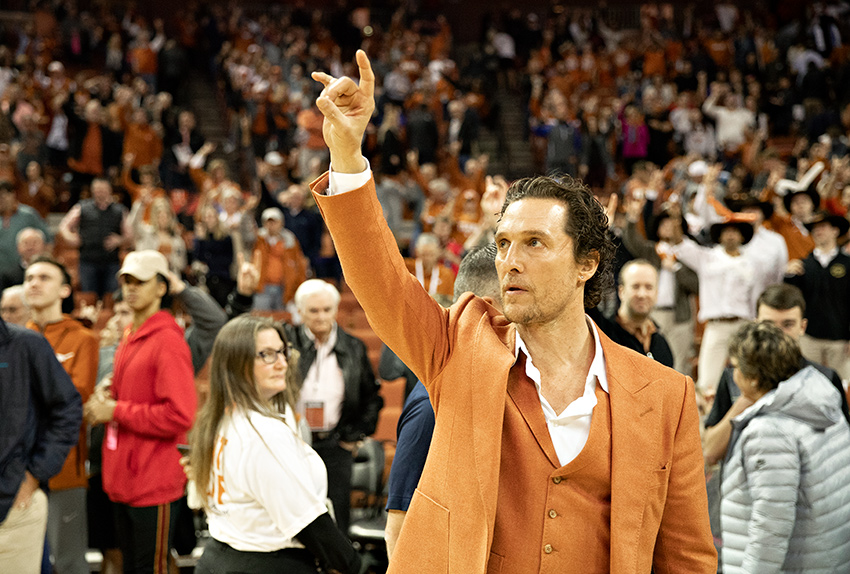 Typical college basketball benches feature about 10 players, a head coach, several assistants and trainers. Some colleges take their benches to the next level with coordinated bench mob celebrations. And then there’s Texas, who added Academy Award-winning actor Matthew McConaughey to the end of the bench to fuel the Longhorns to a 75-72 win over Oklahoma on Saturday.

“It kept the mood light for sure, but he has a strong message he gives to us every time he sees us,” forward Dylan Osetkowski said. “He dared us to be who we are tonight. He dared us to play for each other tonight for 40 minutes.”

McConaughey, a 1993 graduate of Texas’ radio-television-film program, is a frequenter of Texas football games, observing often from the sideline or his suite. But on this occasion, the actor reached out to head coach Shaka Smart to play a role in the Longhorns’ basketball atmosphere.

“He hit me earlier in the week and said that he might come. We said, ‘That’d be great. We’d love to have you here,’” Smart said. “He actually gave the pregame talk. We were in the locker room, the guys were out there warming up, and I said, ‘You want the last word?’ And he said, ‘I’d be upset if you didn’t ask me to.’”

McConaughey was more than just a spectator. During timeouts, he talked to players one-on-one, providing advice. Perhaps his greatest impact on the hardwood was serving as a minister of energy. Late in the contest, McConaughey was seen encouraging freshman power forward Kamaka Hepa to stand up and inject energy into the game from the bench.

“He did a great job,” Smart said. “The interesting thing is during the game and the timeouts, and a couple times I peeked over at him, he looked a little nervous. So, I’m glad we could get this one for him and for all of us, but he was a big part of it in terms
of energy.”

Texas’ newest assistant also contributed to increased decibel levels from the audience. When McConaughey was shown
flashing the Hook ‘Em hand gesture on the scoreboard in crunch time, the packed house at the Erwin Center reached peak volume, unlike any audience Austin had seen all season.

“It was great to finally play a game tonight with a crowd like that,” Osetkowski said. “We used the crowd’s momentum tremendously. We just want to thank the fans tonight, and we need their support night in and night out in the Big 12.”

“That was high level,” Smart said of McConaughey’s outfit. “I would love to get one of those. He said he got it overseas. He has some connections I don’t have.”