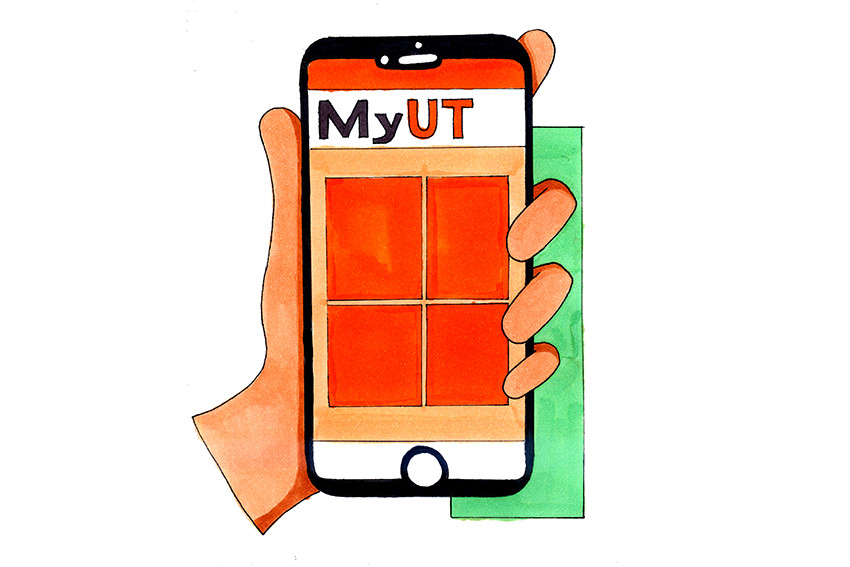 An app version of the University’s MyUT online portal is now available for students to download.

Like the portal website, the MyUT Austin app allows students to access class schedules, Canvas and other campus-related information. Since its release last Thursday, the app has been downloaded more than 12,000 times, said Carolyn Connerat, chair of the MyUT Implementation Committee.

“We know that students are very focused on having a mobile device, so we always intended when we launched the website in 2016 that we would develop a phone app,” Connerat said. “We’re very excited that this has finally launched.”

Connerat said the app has been in the works for about a year and includes the aspects of the MyUT website accessed most by students.

Upon opening the app, there are five tabs at the bottom of the screen. The first displays a student’s class schedule, the second shows a list of Canvas courses and the third is a ‘home’ tab that displays links to information such as financial aid and transportation information.

Another tab, Important Info, displays information such as what a student owes to UT and displays any registration bars. The last tab links to a University map in a web browser.

Before the MyUT Austin app, there was a University app that included UT directories, maps and information about athletics, Connerat said. Last summer, the app was replaced with an app just for Texas Athletics.

“We decided that it would make more sense to have two (apps) — one that is really tied into MyUT, which is focused on the services and resources that students need, and then athletics would have their app which would be much more focused on the fan experience,” Connerat said.

Biology freshman Trazy Villatoro said she had downloaded the old UT app but deleted it because it had more sports-related content than academic information. She said the schedule tab on the MyUT Austin app has been helpful.

“I’m actually using it a lot right now because the semester just started,” Villareal said. “Every time I got out of class today I just went back on my phone like ‘okay, where do I go next?’”

Villatoro said something she doesn’t like is that parts of the app link to internet pages on the MyUT website. Connerat said the MyUT team is working on more native apps that can be built into the app in place of these website links.

Connerat said a major feature of the app is users only need to log in once, whereas the website version asks the user to log in again after an hour of inactivity.

Electrical engineering junior Ryan McCray said while there are a few things he would like to see improved on the app, such as the website links and the page formats, he thinks it’s a more user-friendly version of the website.

“Anything that helps students access the information they need quickly is a good thing,” McCray said.

The app is available for iOS and Android devices and is free to download.