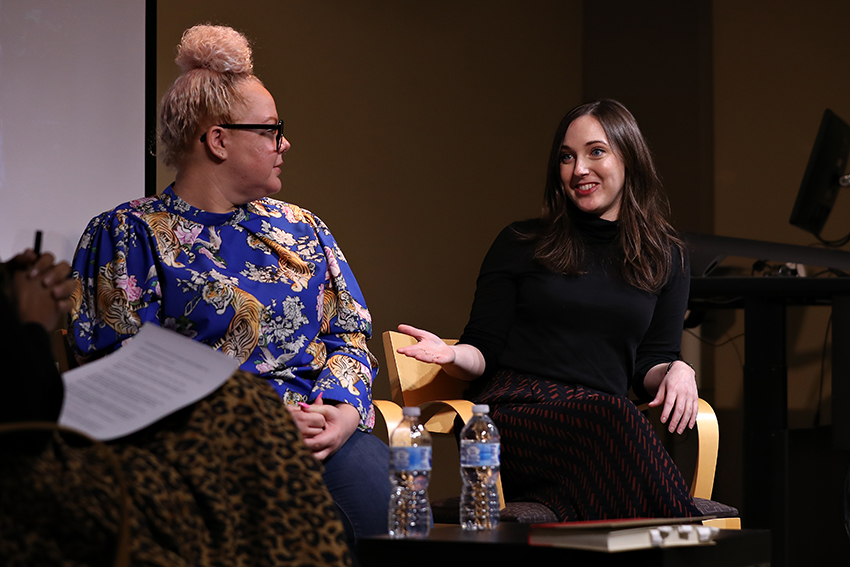 Genevieve Gaignard, a Los Angeles-based artist, spoke Wednesday morning about how her work was influenced by her identity as a biracial woman.

“I had a story that maybe wasn’t as traditional, and I thought there was something to explore there,” Gaignard said.

The event, On Identity, was held in the Gordon White Building and hosted by the Art Galleries at Black Studies, allowed Gaignard to discuss her photography. Cherise Smith, chair of UT’s African and African Diaspora Studies, and Ashlyn Davis, curator and executive director at the Houston Center for Photography, joined the conversation about Gaignard’s work.

Gaignard said part of her creative process is placing herself in her own work. The artist used different costumes and characters in her photographs.

“I say a character, but I feel like there’s a bit of my story in all of them,” Gaignard said. “In a lot of (my photographs), I’m putting myself in a vulnerable position.”

Gaignard also said she draws from her childhood to create these characters.

“That geeky white lady was my babysitter,” Gaignard said of a character in one of her photographs.

The artist also said she uses tropes or clichés in her work.

“I’m using the cinematic tropes, but I’m trying to flip them,” Gaignard said.

The topic of intersectionality arose in the conversation. Smith tried to define the term by mentioning her different identities as a professor and as a mother.

“It is describing the ways that all our identities intersect,” Smith said.

When she creates her photos, Gaignard said she does not really have a process.

“I might need inspiration, so I go in a wig shop,” Gaignard said. “I want to make a picture there. Who would inspire that picture?”

Rafael Gutierrez, studio art graduate student, said he thought the event was educational for him.

“It was informative to see other artists of color and how they’re defining their position (in the art world),” Gutierrez said.

Gaignard said she hopes her art can be part of a larger conversation about different identities.

“My hope is that it goes beyond just photography,” Gaignard said. “I want folks of color to feel as if they’re being seen.”

The In Passing art exhibition, featuring work from Gaignard, will run through May 4 in the Christian-Green Gallery in the Beaford H. Jester Center.