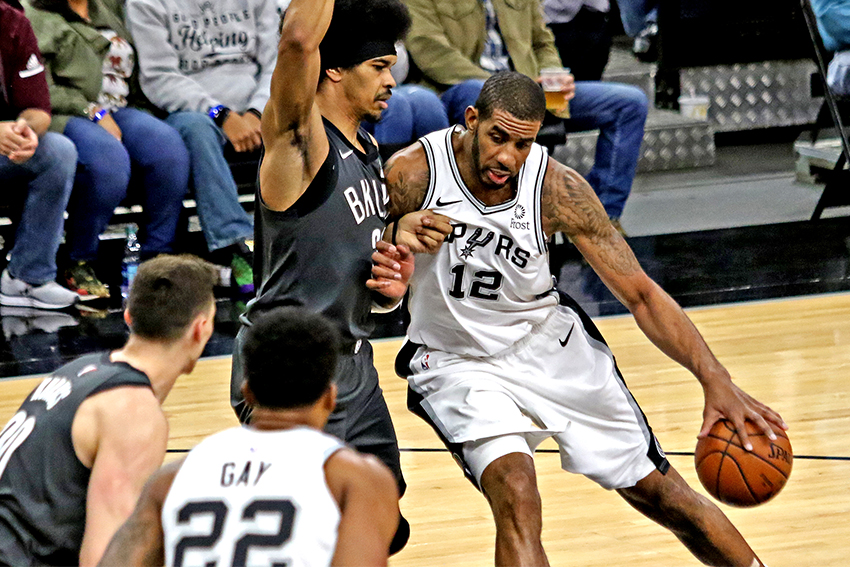 SAN ANTONIO — Prior to Thursday night’s tipoff at the AT&T Center, Spurs power forward LaMarcus Aldridge earned his seventh All-Star selection in his 13-year career, his third in four seasons with San Antonio.

With his team leading by one and 51.1 seconds on the clock, Aldridge unleashed his stardom, drawing a foul while sinking a strong layup to secure the Spurs 117-114 victory over the Nets.

“LA made some huge plays down the stretch,” Spurs point guard Derrick White said regarding the clutch basket. “The floor was kind of spread. We had a lot of shooters out there. He had a mismatch, so I tried to go over the top. He had a nice catch and finish.”

Aldridge responded to his recognition with a 20-point, 13-rebound double-double. His defensive matchup in the paint may have been 13 years younger, but the two share a close connection: alumni status at the University of Texas. Nets center Jarrett Allen, a Longhorn from 2016–17, served as Aldridge’s primary counter when the two shared the floor. But the team employing an All-Star prevailed to win a nailbiter, continuing to rally around the Texas alumnus.

“He’s had a great season and has really kept us together,” head coach Gregg Popovich said. “During the tough times when you’re really discombobulated, he’s been a beast all season and it’s a good reward for him to make the All-Star team. He deserves it.”

Aldridge converted on just 5-of-13 field goal attempts in his 38 minutes, but he delivered in the rebounding and physicality departments. As the Spurs’ premier rebounder, Aldridge was effective on box outs on the both ends, sparking his team on the glass and as a veteran leader. As a result, the Spurs have checked off their fourth straight victory.

“The whole thing I’ve been preaching is to take care of the homestand,” Aldridge said. “And we’ve done that so far.”

On the other end of the court, Allen scored 14 points, with several of his baskets resulting from his signature pump fake under the basket. It’s a move Allen has become accustomed to, and it’s often a golden ticket to the free throw line. For a near 7-footer, Allen did an excellent job running the floor. In one sequence Thursday night, he emphatically rejected DeMar DeRozan’s layup and sprinted down the AT&T Center floor for an and-one layup seconds later.

In one of his best outings of his sophomore campaign, Allen recorded a statistic he had previously attained just nine times in his 122-game career — a 3-pointer. On a fastbreak in the third quarter, Allen positioned himself in the corner and cleanly swished a high-arcing three. Thanks to Aldridge’s impact down low, Allen only collected three rebounds, but fighting for rebounds is an area in which he’s already progressed exponentially.

“It’s really come out of nowhere. It wasn’t a point of emphasis,” Nets head coach Kenny Atkinson said on Allen’s rebounding prowess. “I just think it’s the Ed Davis effect. I think he said, ‘I watch Ed Davis, and if Ed can get them, so can I.’ It’s also the physical development. He feels stronger and more confident.”

With 3-point shooting and rebounding improvements, Allen could be well on his pace to becoming a future All-Star. His Longhorn counterpart, Aldridge, didn’t earn a selection until his fifth season, but the All-Star Game is now a fixture on his February schedule.

“We’re having a good season as a team and I’m definitely thankful to go again and I don’t take it for granted,” Aldridge said. “It shows the hard work I’ve put in and my teammates have put in has paid off.”