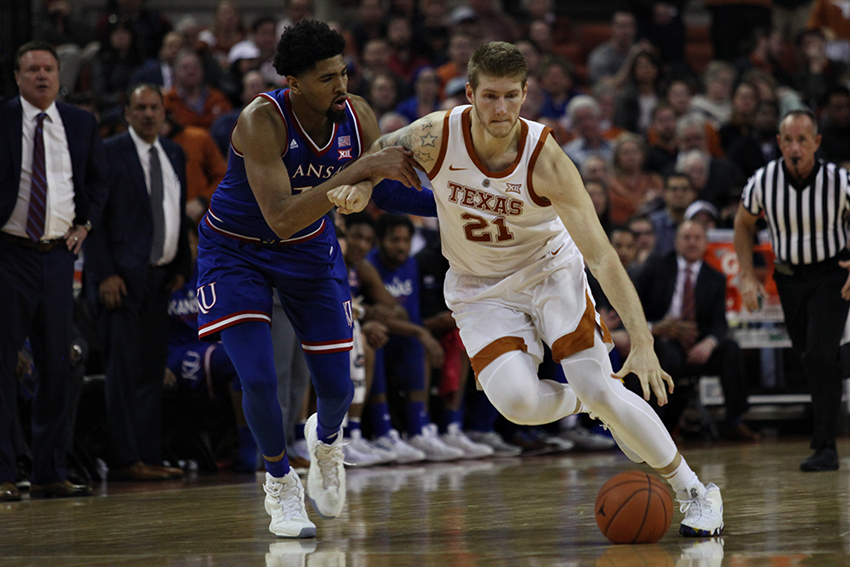 Dylan Osetkowski could see the lead dwindling on the scoreboard. After a break at halftime, Texas’ offense had fallen into an unproductive motion of missed shots and turnovers, allowing Kansas to make a run and get back into the game.

Determined to get the Longhorns out of a funk, the senior forward took matters into his own hands. On three of the next four possessions down the floor, Osetkowski called for the ball down on the low block.

And his assertiveness worked, with his bruising post moves allowing him to grab easy points in the paint. When he got double-teamed, he simply kicked it back out to guard Courtney Ramey for an easy three.

The end result was Osetkowski scoring or assisting on seven straight Longhorn points, switching momentum at a pivotal moment almost midway through the second half.

“I feel like my bread and butter is in the post,” Osetkowski said after a team-high 16 points in the Longhorns’ 73-63 victory against Kansas. “I made strong moves, do what I do and the ball went in the basket.”

It’s been Osetkowski who has exuded a needed confidence and aggressiveness for the Longhorns in recent weeks. After a tough stretch to begin the season, the San Diego native has turned into one of Texas’ most productive players.

Since the Longhorns’ road loss on Jan. 14 against Kansas, Osetkowski is averaging 13.2 points per game and 8.2 rebounds — both figures above his season average.

Part of Osetkowski’s strong play stems from a desire to make the most of the remaining few weeks of his college career, which has led him to flourish over the last five games, head coach Shaka Smart said.

“He has an understanding that he’s a senior, and he has a certain number of games and weeks left,” Smart said. “It changes our team when he has that mindset because he brings a toughness that we need and makes our guys a little sturdier out there.”

When Osetkowski plays at a high level, the Texas front court becomes a formidable unit. Combined with forward Jaxson Hayes, the two are able to push around even the Big 12’s most elite teams.

On the court, Osetkowski has developed into a vocal leader, unafraid to share his opinion with his teammates. By sharing what he’s faced and what he’s learned, he hopes to guide his younger teammates through the ups and downs of a tough conference slate.

With his time at Texas coming to an end shortly, Osetkowski just wants the Longhorns to seize the moment. Stepping up as an aggressive player and vocal leader will help the team
accomplish that.

“Really (Kerwin Roach II) and I are both trying to share every experience we’ve come through college,” Osetkowski said. “We both know time is getting shorter and shorter here at Texas, so both of us are trying to make most of the opportunity we have. We’re just trying to get everybody on the same page in practice and in games.”