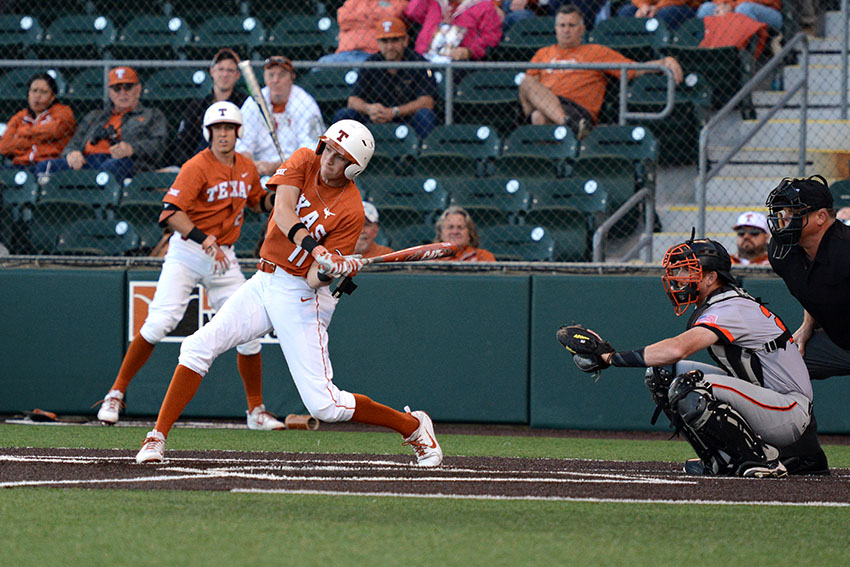 After 10 innings of play, Texas’ first game of the series ended when pitcher Brandon Ivey was able to stop the Cajun offense. Yet, the Cajuns powerful offense was halted for almost nine innings thanks to pitcher Bryce Elder.

Elder dominated the Texas defense. Elder tallied nine strikeouts, four hits and zero walks with almost 100 pitches. In addition, Elder assisted all three outs in the bottom of the sixth inning and made two barehanded catches.

With this performance, Elder is a top runner to start over veteran Blair Henley and Coy Cobb.

The Cajuns seemed visibly frustrated with Elder at the top of the mound. The Cajuns were unable to get into scoring position until Elder was taken off the field at the beginning of the ninth inning.

Elder allowed one final run before being replaced by Kamron Fields. Fields was unable to stop the Cajun offense and setback the offense with a run that tied the game 1-1.

His lackluster performance was quickly ended by head coach David Pierce, who put in left-handed pitcher Brandon Ivey. Ivey was able to stop the Cajuns building momentum and pushed the matchup into the 10th inning.

The 10th inning brought out the best in the Texas offense. With Bryce Reagan and Duke Ellis on bases, Austin Todd hit a two-run double that put the Longhorns up 3-1. Todd was successful on the field all night with three hits.

Leadoff hitter Duke Ellis was the most successful batter of the night, with three walks, one single and a run.

Eric Kennedy and Reagan were unable to accomplish much offensively. Reagan ended with one hit and one run scored.

The games offensive action began in the seventh inning with a base-hit from Ryan Reynolds that put him up on first and DJ Petrinsky on second. With this momentum, Michael McCann hit a cannon into the outfield that bounced over the back wall.

An automatic ground-rule double placed Petrinsky on home plate and put the Longhorns on the board for the first time this season.

The following batter, Reagan, was unable to push the remaining runners onto home plate and struck out.

After the rigorous performance, Texas must continue challenging the Cajuns’ strong squad in order to win the series.

The Longhorns will again face the Cajuns on Saturday at 2 p.m. for their second game of the series.