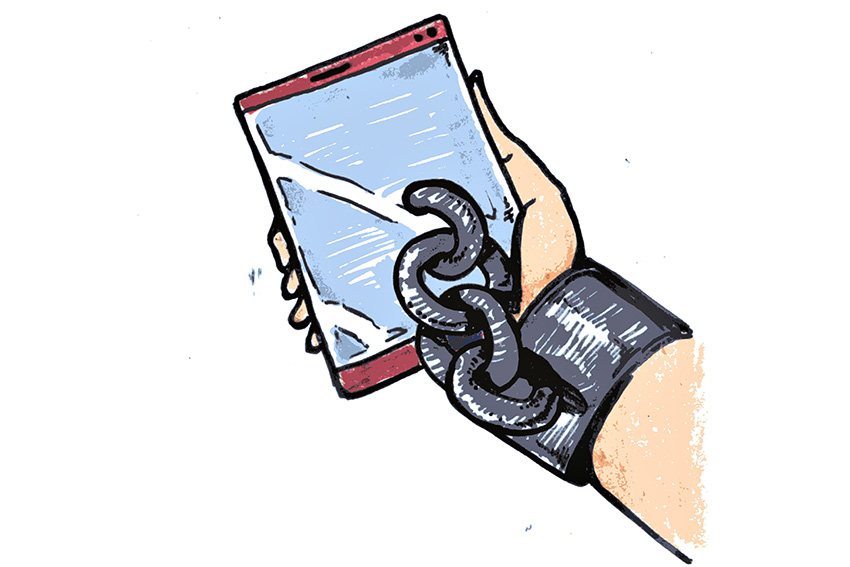 Walking around campus, it’s difficult to find an area free of people glued to their phones. Over the last several years, the smartphone industry and social media platforms, such as Twitter and Facebook, have created features to help users track how much time they are spending on their phones.

Keri Stephens, UT organizational and communication technology associate professor, has done extensive research on the way people interact with communication technologies. Stephens said a downfall to a tool that helps analyze screen time is “habituation,” a theory that could lead to individuals not even acknowledging the tool as their exposure to the feature increases.

“Over time, people may become habituated unless they consciously want to monitor their activity,” Stephens said. “If you are trying to monitor your activity and limit it, this feature could be helpful over time. Otherwise, it is an annoyance and a very easy thing you can click off before you even look at it.”

While habituation poses a potential challenge to successful use of these features, history senior Brittany Smyth said her justification for not using the feature is built upon its low levels of accuracy.

“(When discussing screen time), I think they’re usually talking about Facebook, Instagram — that sort of thing,” Smyth said. “The feature isn’t going to be accurate for what people are concerned about: wasting time.”

Despite the question of accuracy, business junior Christian Vega said he uses his iPhone’s analytics feature to help him manage his time and productivity. For Vega, this has been particularly helpful in minimizing his screen time during the pockets of time he spends waiting throughout the day.

“Apparently, it is those times (when you’re waiting) that wire your brain not to be able to focus,” Vega said. “If you pick up your phone every time you were waiting or don’t want to be in the present, it becomes a habit of just picking up your phone constantly.”

Vega said that through his continuous effort he has been able to skim one hour of phone time off his day. Though this may seem like a small step toward productivity, Vega said he feels the impact of his efforts and challenges others to take the opportunity to minimize their own phone time.

“You should definitely look into your phone usage because there’s so much technology that has come into our lives. It’s honestly kind of scary,” Vega said. “We could end up in a world like WALL-E where everyone is just sitting down and the computers do everything for you.”

Through her research, Stephens has created a strategy that enables people to limit the instinct of reaching for their phone and derive meaning from that instinct.

“I tell them to get a sticky note pad and every time they are tempted to look at their phone, make a tick mark,” Stephens said. “They’ll get to the point where they make that tick mark, ask themselves why they had that temptation and go on to actually learn to better control their own behavior.”