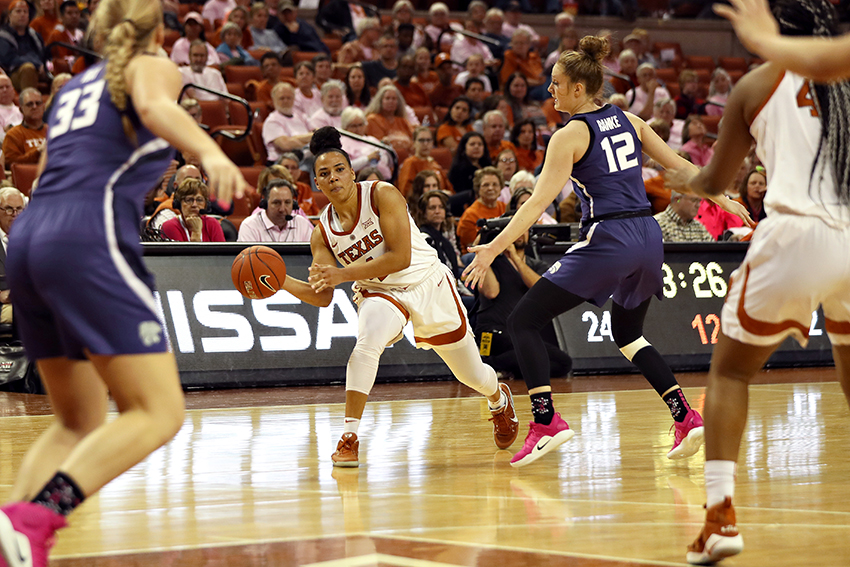 That was the statement Texas guard Danni Williams used to sum up Sunday night’s game after blowing a substantial third-quarter lead to an unranked Kansas State team.

“(It was a) pretty sleepless night,” head coach Karen Aston said. “Anytime you have a performance at home … it’s disappointing. You feel as a coach that you’ve disappointed the fans.”

Fortunately for Aston and the Longhorns, they have another opportunity to redeem themselves in front of the hometown fans Saturday when they host Texas Tech. Despite having nearly a week to reflect on the collapse over the weekend, Texas is trying to shift its focus toward the Red Raiders.

“You have to turn the page pretty quickly,” Aston said.

The Longhorns are hoping to not fall into an early hole as they did in their previous matchup with the Red Raiders, a 78-71 win on Jan. 26, when Texas Tech jumped out to an 11-point lead after the first quarter.

Texas Tech comes into this game 12–13 overall but should not be taken lightly by the Longhorns. The Red Raiders and Texas are in the top four scoring teams in the Big 12. Along with the ability to put the ball in the basket, Texas Tech will try to create a winning streak with a victory Saturday, which would finally put them at .500 on the season.

In the previous matchup, turnovers weren’t as much of a problem as they usually are for Texas. The Longhorns only turned the ball over 10 times, which will be something they will try to replicate.

With the loss to Kansas State, a win could shake things up for Texas to get back on track before a monumental road test against No. 1 Baylor on Monday.

Two of the young players that can see substantial playing time are guard Joanne Allen-Taylor and forward Audrey Warren.  Allen-Taylor played five minutes in the previous matchup with Texas Tech. Warren was forced to leave after suffering a concussion in the early moments of the game. The injury forced her to miss three games.

One of the key issues Texas will look to correct is playing with a lead and trying to close out games. Aston has stated on many occasions that the Longhorns’ tendency to take the foot off the gas pedal and let the opponent back into the game — an issue that has cost Texas multiple games.

“We can’t do that in any game,” guard Destiny Littleton said. “That’s what hurts.”

Now ranked at No. 19 in the country, Texas is fighting for confidence and seeding in the NCAA tournament moving forward. With four games left — and one of those games being against Baylor — every game is a must-win.