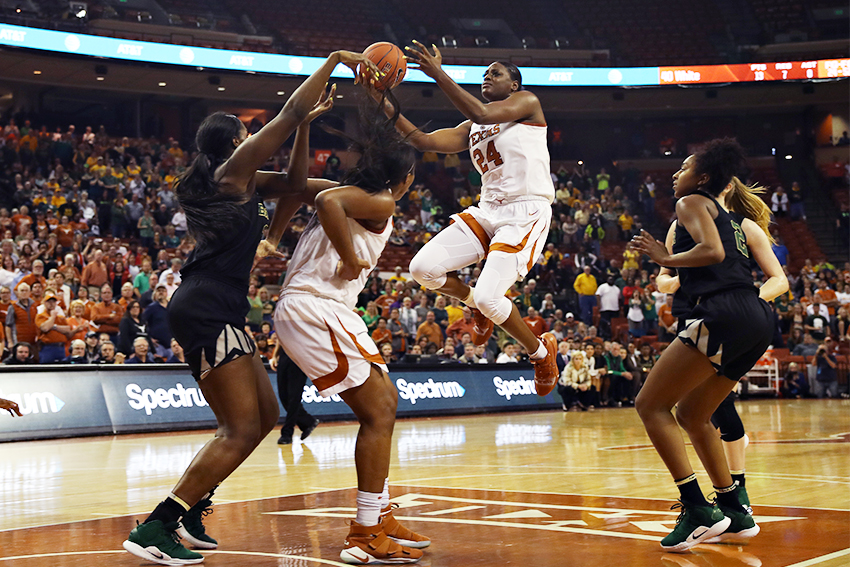 Fans who have followed Texas at length will be the first to say it: These aren’t the same Longhorns of years past.

A litany of injuries and inexperience have proven that Texas has room to grow, having lost its most conference games (four and counting) since the 2015–16 season, including two home losses to unranked opponents.

But Saturday, none of those issues were present. And these weren’t the same Longhorns.

Texas used an explosive first quarter to leap out to a 21-6 lead and never looked back in a much-needed 81-57 statement win over the Red Raiders.

“In the last couple of years, I don’t think a 20-point win over Texas Tech would have given us confidence … and for us to be able to have this kind of win, as competitive as they’ve been, was a good performance that we should feel confident (about) going into our next game,” Texas head coach Karen Aston said.

Behind a 16-2 run and nine points from forward Joyner Holmes, the Longhorns sent a message early in the first quarter that the game was theirs to own.

Holmes had arguably her best performance of the season, finishing with 20 points, six rebounds and four assists.

Aside from the 19 turnovers, which have seemingly become a side effect of the Longhorns’ play, fans were left with little to be desired in the first half.

Texas Tech briefly gave the Longhorns a scare by trimming the Longhorns’ 25-point halftime lead down to 12 in the third quarter, giving violent flashback to a horrendous home loss to Kansas State whenever Texas blew a 14-point lead.

But Texas quickly adjusted, refocusing, substituting in the hot hand of Holmes and subsequently rattling off an 11-0 run.

“I think we did learn some lessons from (Kansas State),” Aston said. “Unfortunately, it took a loss to do that, but I think we had more patience. … I definitely thought we played with more intention today.”

But for Texas Tech, a team that has struggled to gain respect from the rest of the Big 12 in recent years, head coach Marlene Stollings uses a different measuring stick to gauge her team’s performance.

“(Texas is) one of the better teams in the nation, and we’re rebuilding. We’re working towards being where (Texas is) at,” Stollings said. “We want to cut down nets again, we want to win national championships again, those are things that we have our eyes set on.

Up next for the Longhorns? A trip to the juggernaut of the Big 12, Baylor, which held off a furious 4th-quarter Texas rally in the last meeting in Austin.

But the players couldn’t be more excited for their rematch in Waco, smiling as they jogged off the court, understanding the importance of their blowout victory.

“I think it definitely gives our team a little bit of swagger going into the next game,” forward Jada Underwood said. “We’re just going to go to war (on Monday in Waco).”

Holmes, who had her hands full with Baylor’s Kalani Brown in their last matchup, is more than ready for the rematch.

“We can compete with anybody,” Holmes said.