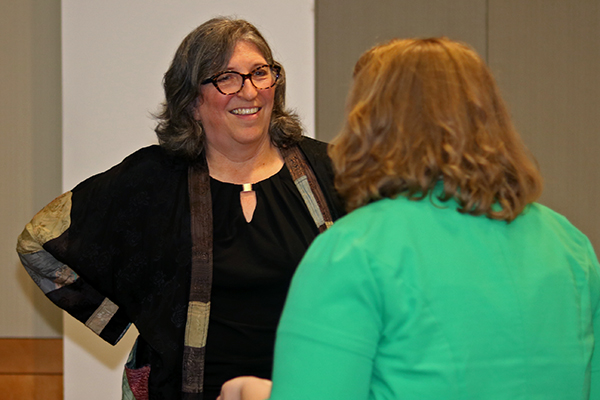 The conference, hosted by the Texas Linguistics Society, featured talks from linguistics researchers and provided an opportunity to bring together professionals in the small but tightly-knit field of linguistics, said conference organizer Scott Spicer.

“Linguistics anywhere is a small field,” said Spicer, a linguistics graduate student. “Even so, UT’s linguistics department is pretty prominent globally, and we’re proud to be hosting this conference.”

As conference organizer, Spicer helped select the speakers for the conference, a process that involved the detailed review of over 60 submitted abstracts.

Researchers Alexandra Lawson and Abigaël Candelas de la Ossa discussed their research on the language the media uses to describe the queer Hispanic community after acts of violence.

“Journalistic language today presents white gay men as the primary recipients of violence,” de la Ossa said. “The language used by the media in regard to queer Latinidad victims has often been unsympathetic.”

De la Ossa and Lawson analyzed over 800,000 words published in the media about the victims of the 2016 mass shooting at the Pulse nightclub in Orlando. De la Ossa said media language marginalized the queer Latinidad victims of the shooting due to implicit bias.

“There should be greater attention paid to the discourses of solidarity and sympathy in journalistic practice,” de la Ossa said.

Developmental psychology professor Jenny Singleton presented her research on how deaf children acquire the use of sign language.

“Deaf children have to learn to look for language in a way that hearing-abled ones do not,” said Singleton, who came from a signing home herself. “Infant visual and mental processing is heavily connected to how they learn to sign.”

In her presentation, Singleton showed videos of deaf toddlers and children learning how to sign by observing their surroundings.

Singleton compared the use of visual and haptic feedback for deaf children to the way hearing-abled children learn to speak.

“We don’t have the opportunity to reach into the mouth and mold language with spoken language, but that’s something that we can do with deaf children,” Singleton said.

Spicer said the conference emphasized the globality of linguistics and its inclusion of many languages.