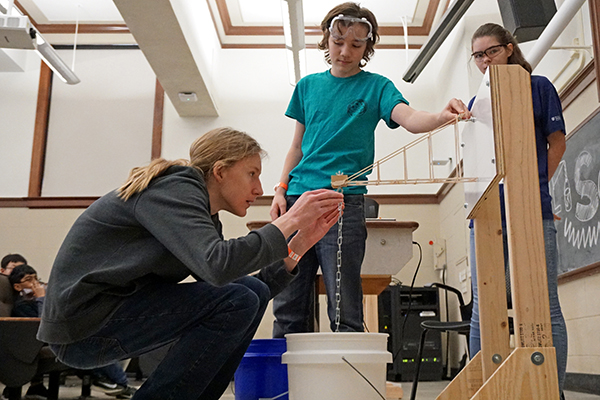 Students from more than a dozen schools across Texas gathered at UT for the annual Science Olympiad Regional Tournament on Saturday.

Sixth to twelfth-grade students were assessed by 23 national events and five state events within different sciences, ranging from astronomy and computer science to geology and anatomy.

The UT Science Olympiad Alumni Association brings together UT students passionate about connecting with others and promoting interest in STEM early on, according to the UTeach Outreach website.

In the past, the UTeach Outreach program collaborated to host Science Olympiad tournaments on campus, but as the tournaments has grown, the initiative has been sustained by students in the association and other supporters, including the UT Institute for Geophysics.

At this weekend’s tournament, students from across campus gathered to help organize the event and foster STEM growth.

“Even though I never heard of Science Olympiad before because it wasn’t at my school, just based on the description I thought it sounded cool,” said senior nutrition major Benita Thomas, who volunteered at the event.

Since its creation, the association has expanded its efforts outside of just hosting tournaments for middle and high schoolers, said Ojas Potnis, UT Science Olympiad tournament director.

“Running tournaments is one of the facets that the student organization focuses on,” biomedical engineering senior Potnis said. “On top of that, we also look at outreach. We want to be able to foster new teams in the Austin area and in Texas as a whole.”

The association also collaborates with local teams to teach them study habits and how to gather resources, chemical engineering junior Tanmaya Shrivastava said.

“We offer mentoring opportunities where members will talk to teams and students who need help on content in their events, study habits or institutional knowledge on how to run a team and gather resources,” Shrivastava said.

The effects of the association were shown at this weekend’s tournament.

“Murchison Middle School, one of the middle schools we supported when they tried launching a Science Olympiad program, has shown absolutely fantastic progress,” said Potnis.

Potnis said Murchison Middle School is now competing at the regional level and placed sixth among Division B schools this past weekend.

Potnis said the association has also provided students an opportunity to explore future careers in science.

“Science Olympiad gave me a positive environment of comradery and collaboration to learn sciences … It gave me the opportunity to explore them and learn what I wanted to do as a profession,” Potnis said.