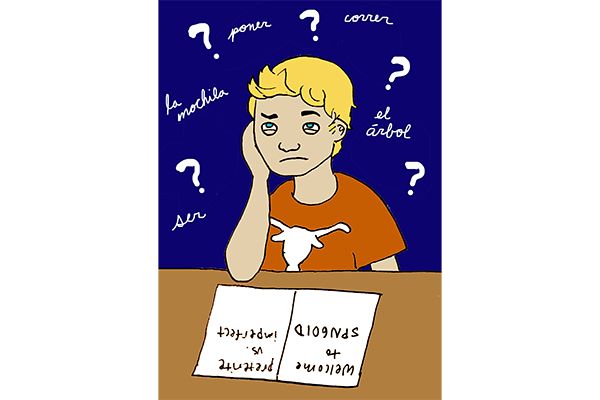 After three years of high school Spanish, public health junior Fatimah Sunez was ready to continue learning Spanish at UT. Hoping to become fluent, her background and enthusiasm provide her with an advantage over students who are beginners.

Sunez is currently taking 601D, an introductory Spanish class. She said the course proves to be more difficult for students who have no background, which is a sentiment her classmates share.

“The class needs to focus on starting from scratch so people aren’t discouraged from the language,” Sunez said. “(Sometimes) they expect you to know words they haven’t taught.”

Melissa Murphy, language director of Spanish and Portuguese, said the class starts with the basics, with zero expectation that students have prior knowledge. However, the course is able to take advantage of UT’s location.

“The vast majority of our students have a background in Spanish,” Murphy said. “We’re able to move faster than we would if we were in a different location.”

Murphy also said testing on words students may not have been taught in class is intentional.

“Students are exposed to more words they’re not familiar with,” Murphy said. “Their ability to understand new and unfamiliar material is much better than it was before.”

Using authentic materials such as newspapers, Murphy said the introduction of new words and grammatical structures allows students to mimic learning Spanish in the “real world,” where they will be faced with words they haven’t seen before.

“We want them to develop the skill of being able to navigate through that material,” Murphy said. “That’s an essential skill for a second language.”

Nonetheless, after hearing about the level of difficulty and time commitment from advisers and seeing others take the course, students such as advertising sophomore Marty Abell decided to take the course online, rather than at UT.

“Every night, (my roommate) has Spanish homework and often neglects other courses that pertain to her degree because the Spanish course is so demanding,” Abell said.

“I had two students in my class that had no language skills,” Potter said. “One of them worked super hard and she made a B.”

Government sophomore Ava Said took Potter’s class last semester. She came into 601D with three years of high school Spanish and said although there’s a gap between beginners and those with experience, it can be closed with hard work.

“What makes or breaks the course is the professor,” Said said. “As long as you’re willing to go in it with an open mind, it’s going to work out fine.”

Beginning in 2010, the Spanish program transitioned from a four-semester course to a more rigorous, three-semester course. Murphy said the program has seen students’ fluency improve since the transition.

Paired with a new way of teaching that shifts away from rote memorization and six-hour courses, the course can be overwhelming for students expecting a smaller workload, Murphy said.

“Twenty years ago, Spanish was seen as an ‘easy A’ course and (students) can get an A if (they’re) putting in the work,” Murphy said. “But it’s not guaranteed.”