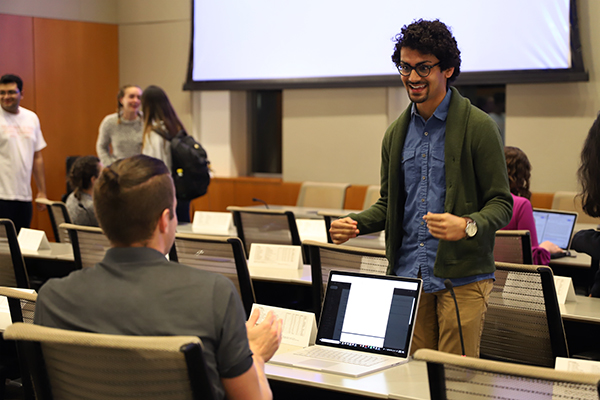 First year representative Avi Patel presented Joint Resolution 9. The resolution seeks to encourage professors to institute UT Instapoll, a polling system available through Canvas, in their classrooms instead of response systems such as iClicker and Squarecap. The resolution was referred to the Academic Affairs Committee.

“Students at the University of Texas at Austin are faced with the issue of having to pay for subscriptions to multiple services that provide the same function in different classrooms,” business freshman Patel said. “Additionally, they’re not able to take advantage of the year-long value package that these services provide because of the variances among classrooms at UT.”

“This legislation proposes to form a task force composed of students, faculty members and UT Instapoll developers to essentially meet with department heads and professors to ensure the proper implementation of UT Instapoll in each department,” Patel said.

“When we interviewed him, we felt like he really stood out in the way he was able to sort of structure arguments and create a case,” said Birenbaum, Plan II honors and business honors senior. “Really, all Supreme Court does is thinks things through logically and tries to write in a way that’s very clear so that people are really able to understand the arguments, they’re able to flow very effectively, and James did a great job at being able to do both.”

“All the LSOs (Legislative Student Organizations) worked very well together, and we decided that it would be very beneficial to go forward and make sure that we all were on the same page, and all agreed to what guidelines the committee would follow,” Lee said.