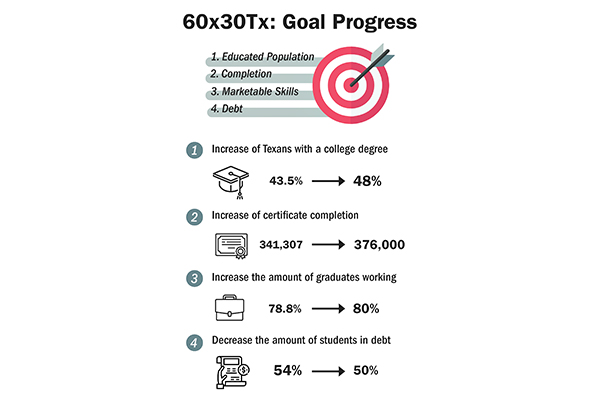 The Texas Higher Education Coordinating Board’s plan to increase the number of educated Texans is facing its first benchmark in 2020. The program is on track in some areas, but falling behind in others.

“We believe in aggressive plans,” said David Gardner, the board’s deputy commissioner for academic planning. “We don’t believe in plans that are easy. We want to stretch ourselves.”

The project, called 60x30TX, was created in 2015 to increase the percentage of Texans between 25 years old and 34 years old who have at least a bachelor degree by the year 2030. This objective is split into four goals: increasing the number of people with degrees, increasing degrees awarded in Texas annually, increasing marketable skills acquired by each student and decreasing the percentage of students with student debt.

The marketable skills goal, or the amount of job skills students get through their degree, is harder to quantify, Gardner said. The goal is to keep the level of graduates who are employed one year after graduation at 80 percent every year. That number has stayed around 78 percent since the program launched.

The debt goal, which involves reducing the amount of graduates with student debt to 50 percent by 2020, exceeded its benchmark by 4 percent — the only initiative to do so.

“I’m a big believer that we are (achieving our goals), but I don’t assume that it will happen naturally,” Gardner said. “That’s why we collect data regularly, that’s why we are moving forward.”

Progress toward these goals is accomplished in different ways. The board has teams for different regions to meet the needs of institutions in those areas. Rosemary Haggett, member of the Dallas-Ft. Worth Metroplex Regional Advisory Group, said this allows regional differences, such as high school graduation patterns and local labor markets, to factor into strategic planning. For example, UNT is helping create early college high schools to increase opportunities and degree attainment, Haggett said.

“The region is still working on our complete implementation plan, but many of our institutions have a foundation of work on which to implement the strategies and continue and build upon the good work that is ongoing,” Haggett said.

The UT System is helping the board complete these goals as well. Rebecca Karoff, UT System associate vice chancellor for academic affairs, said the System has developed and funded programs focusing on student financial well-being, advising and social belonging to improve academic success.

“The System’s framework for student success — developed in collaboration with institutions — takes a holistic approach to helping students achieve their educational and career goals,” Karoff said in a statement. “Research makes it clear that support in these areas is critical to student success.”