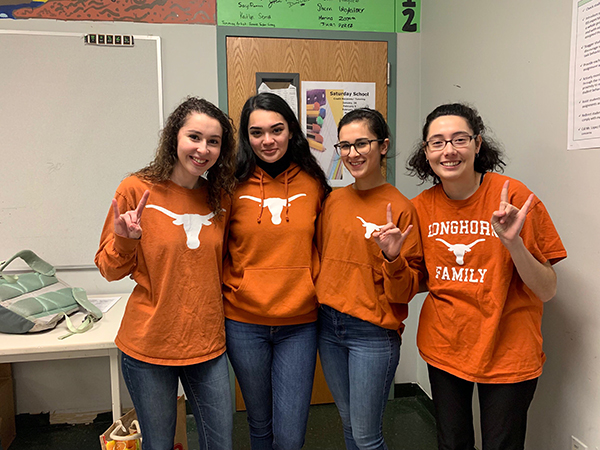 Every Thursday, a group of UT students who are native Spanish speakers go to Ojeda Middle School in Del Valle Independent School District to work with Spanish-speaking middle schoolers and bolster their language skills.

The Ojeda Program is an offshoot of Project SEED. In Project SEED, research assistants go to Spanish-speaking students’ homes to conduct tests on stress during translation tasks, following the students through middle school and high school.

Going into the program, Ojeda Program coordinator Ofelia Negrete said team members thought they would be helping students at Ojeda Middle School translate legal and medical documents so they could help their parents. However, Negrete said it quickly transformed into teaching sessions. Every Thursday, members of the Ojeda Program work with students to create activities to improve their Spanish and teach them about their shared culture.

“They’re always engaging in different activities, whether it’s to learn parts of speech, or different cultural stuff, which we felt from the beginning they were lacking,” said Negrete, biology and Spanish senior. “The goal of this program is for the students to always be learning something without realizing that they’re even learning anything.”

Ojeda Program coordinator Isabel Alonzo said the Ojeda Program team also tries to instill confidence in the students and help them be proud of their heritage in a school environment that may not foster cultural pride.

“Even growing up, my school was majority white, and Hispanics were a minority,” said Maria Navarro, Project SEED research assistant and health and society senior. “There were teachers who told us in middle school and ninth grade, ‘Don’t talk in Spanish’ … because they don’t understand what you’re saying.”

Negrete said part of what brings the group together, besides a love for teaching and mentoring, is their shared culture and their experiences having to translate for their parents, even as young children.

Alonzo, a biochemistry junior, said she feels the program is important not just for education, but also for providing the students with role models.