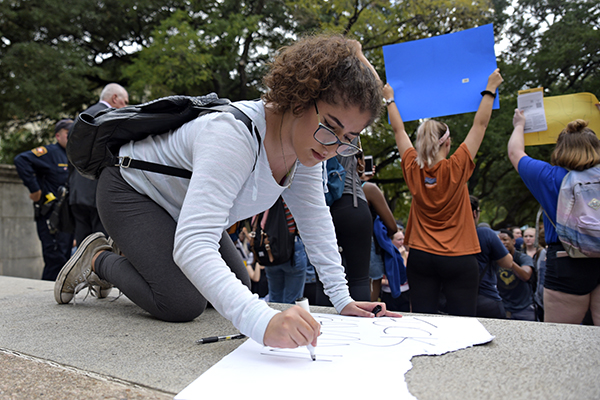 Two high-ranking state senators have filed a bill to establish broad parameters for the free speech rights of students at public universities.

State Sen. Joan Huffman, R-Houston, partnered with state Sen. Jane Nelson, R-Flower Mound, to author Senate Bill 18, which closely follows the principles of The Chicago Statement, a report by the University of Chicago that lays out guidelines to protect students’ constitutional right to free speech.

Huffman and Nelson’s bill establishes a set of rules that all public universities in Texas would need to abide by. The first of these is all common outdoor areas must become public forums allowing free expression. This would eliminate the concept of “free speech zones,” which some universities have used to relegate free speech to certain areas.

Tyler Coward, legislative counsel for the Foundation for Individual Rights in Education, an organization dedicated to protecting campus free speech, said getting rid of the concept of free speech zones would be a “huge win” for students in the state of Texas.

“Defining outdoor areas as public forums is an important thing,” Coward said. “Universities have, in the past, restricted student speech to these free speech zones in a way that violates students’ core constitutional rights.”

Huffman and Nelson’s bill also says students must be allowed to “spontaneously and contemporaneously assemble or distribute written material without a permit or other permission from the institution.” Coward said this stipulation is a “critically important” part of protecting free speech.

“We had a lawsuit (at Cal Poly Pomona) with a student who was trying to distribute vegan literature on campus,” Coward said. “He was doing it outside the free speech zone there, which led to litigation when he was escorted off campus by campus police.”

“I think, especially in principle, Joan Huffman really nailed The Chicago Statement,” said Bonin. a government junior and Young Conservatives of Texas spokesperson. “What I think (The Chicago Statement) does so well is that it balances reality and uses really good examples of real-life problems that there have been, and it ties the principles to those. And I think this bill does a good job of addressing all of those points.”

In a statement announcing the filing of the bill, Huffman highlighted another key portion of her legislation: a provision that would prohibit universities from taking action against student organizations because of their political, religious, philosophical, ideological or academic viewpoints.

“Campus leadership should never stymie free speech at an institution of higher education simply because of a disagreement in ideology or politics … thereby allowing students and faculty to thrive in a setting that respects their first amendment right to free speech,” Huffman said in a statement.

SB 18 mandates that if it passes, students and faculty must be made aware of new free speech policies via updates to student and personnel handbooks, orientation materials and the institution’s website.

“If the whole point of having these free speech rights is to open up discussion and speech on campus and people don’t know about that, then it’s not really going to have any effect,” Bonin said.