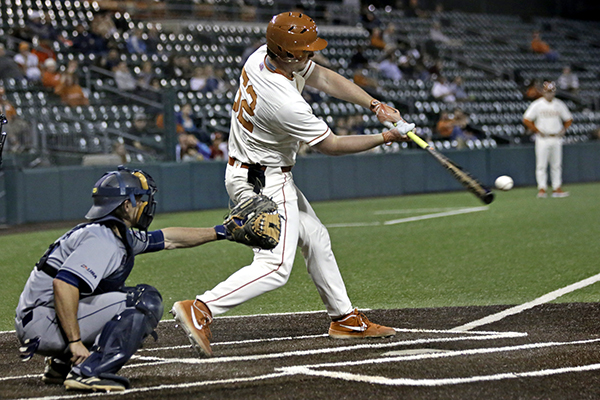 Under the warmth of the dugout’s heaters, Zach Zubia sat with his back pressed to the wall and feet atop the Longhorn bench while reflecting on the Wednesday night loss to UTSA.

The 6-foot-4-inch designated hitter barely fit under the dugout as he towered over reporters’ microphones.

“There is a hiccup every once and a while (sic) and I’m not saying losing to a team is acceptable, but sometimes you’ve got to learn from baseball,” Zubia said. “It’s a humbling game for sure, and it can really teach you (that) whenever you feel on top, it can bring you right back down.”

Zubia was visibly disappointed by the loss, although he tallied his second home run of the season. Texas nearly had the Roadrunners heading toward I-35 before the game was even over. But in the fifth inning, the Longhorns gave up eight runs and watched their six-run lead crumble.

“You score six runs in the first four innings and then don’t put up anything else on the board the rest of the game until the ninth, that’s bad from an offensive standpoint,” Zubia said. “It really wasn’t the best put together game.”

Yet, Zubia was hopeful about the weekend’s matchup against No. 1-ranked LSU, per USA Today Coaches Poll.

“You can’t get consumed in them being the number one team in the country. They put on their pants the same way. You just can’t get consumed in the hype,” Zubia said. “That’s a big thing, we gotta make sure that we stay focused and mentally prepare for what’s coming in. It’s going to be a dogfight all weekend, and I think we’re ready for it and pretty excited for it.”

Named Collegiate Baseball’s All-American DH during his freshman season, Zubia has carved out an important role in the rotation after recording eight hits, six RBIs and five runs through the first two weeks.

Now Zubia will face his biggest challenge of the season, as LSU enters 8–0 start to its season while the Tigers’ three starting pitchers have a combined 4.81 earned run average.

“You just gotta trust your skill and be ready to hit the pitches you can handle. You’re not going to get a lot of chances when you dig yourself in a hole,” Texas head coach David Pierce said. “Everything we’ve talked about day in and day out, no matter who we play, now playing one of the best teams in the country, and we’re going to have to come with our best performance to be successful.”

Hours now separate the Longhorns from their biggest challenge yet as Texas faces the Tigers under the lights of UFCU Disch-Falk Field with a sold-out crowd Friday.

“I think everyone has to understand that one loss doesn’t define your season, that’s the biggest part of it,” Zubia said. “You’ve got to come out every single day, especially on a day like today, and learn and get better. Friday, it’s game time.”