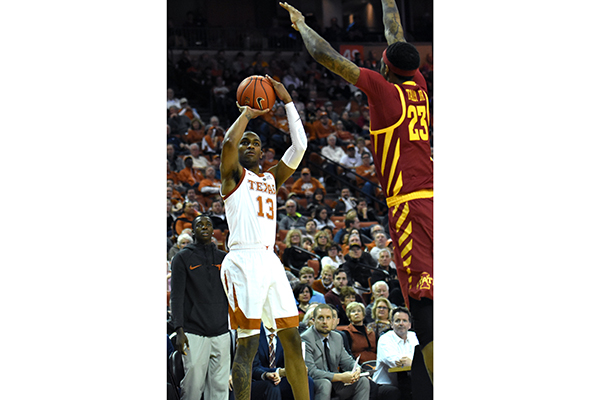 At 17 years old, Jase Febres came to Texas as a younger and underdeveloped player with an immense amount of talent in shooting the basketball. Some saw a project, but Texas head coach Shaka Smart thought he landed a player who could develop into of the best shooters he ever coached.

The journey to becoming that sharpshooter has been lodged in inconsistency at some points in Febres’ first two seasons. But Saturday afternoon, the Houston native continued a torrid shooting streak that has elevated the Longhorn offense over the past three games.

In 35 minutes of action against Iowa State, Febres recorded a career-high in points and three-point field goals with 26 points and eight threes, the most three pointers made by a Longhorn in a single game since 2009.

“I was wide open on a lot of looks,” Febres said. “Just making sure I had my teammates’ backs and making sure I knock down shots is a big key to any game. And they kept feeding me, kept finding me.”

Febres played the game that college shooters dream of having. He missed only two shots all afternoon and made 80 percent of his attempts behind the arc. The Cyclones kept leaving him open, and he promptly made their defense pay the price.

While his shooting percentage has climbed from 30 percent to 37 this season, Febres hasn’t lived up to the billing of being a consistently great shooter. He struggled finding his rhythm from three, didn’t look confident in his shot and battled a thigh injury midway through the season.

But in the past week, Febres has revived his shot and confidence in one fell swoop, putting together two of his strongest games of the season against Baylor and Iowa State.

Against Baylor, he recorded a team-high 23 points on 7-of-14 shooting from three, with 20 of those points coming in the second half and overtime. Combined with Saturday’s performance against the Cyclones, he has shot an eye-popping 63 percent from three in his last two games.

According to Smart, the key to activating performances like the one Febres had Saturday is to ensure his guards are distributing the ball well and getting him the right shot selection.

“He didn’t get a shot for the first about ten minutes, it felt like,” Smart said. “Finally, I told Matt (Coleman III) to get the guy a shot. Get him a shot. The guys have done a good job of finding him the last three games.”

Other parts of the Texas offense have allowed Febres to grow more comfortable. With the Longhorns finding guards who are capable of making plays — including guards Elijah Mitrou-Long and Courtney Ramey — it has opened up the spacing on the floor for Febres to thrive.

“Other players on our team are making plays so when he gets the ball, he’s open,” Mitrou-Long said. “He’s shooting and he’s 6’6”, so if you’re not that tall, you’re not blocking his shot and it’s not touching the rim because it’s going through the net.”

At the pace he’s shooting, Febres gives the Longhorns an extra dynamic on offense that will make them a harder team to stop. Opposing teams simply can’t play a zone defense against them anymore and allow him to shoot.

Just ask Mitrou-Long if he would give Febres that amount of open space he had Saturday in a Texas practice.