Vote Camron & Amie for a ‘UT Led by You’ 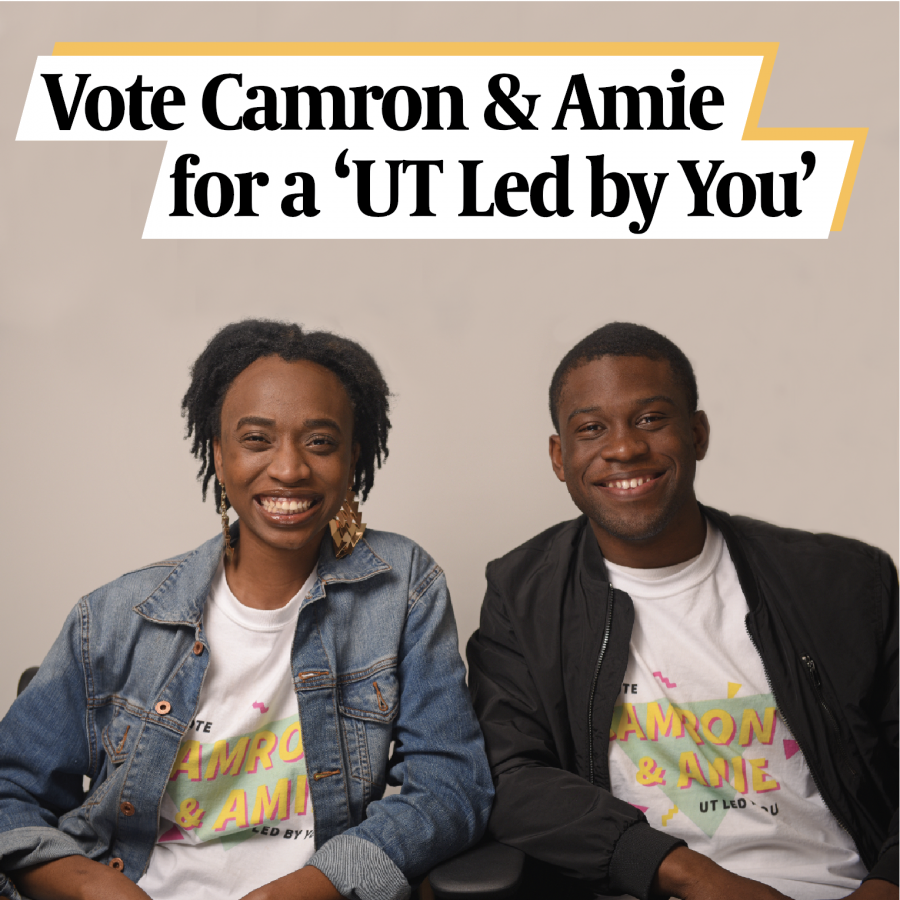 Student government and The Daily Texan serve as voices for the student body at UT. In our role as advocates for the students at this university, the editorial board evaluates potential Student Government leaders. Every year, The Daily Texan editorial board chooses one executive alliance to support in their campaign for student body president and vice president.

This year, we decided who to endorse based on four considerations. First we evaluated the candidates’ performance at the candidate debate held Monday Feb. 25. Then we looked at platform materials provided to the editorial board, including a platform chart, a questionnaire and a candidate column submitted for publication on the Opinion page. Finally, we interviewed the executive alliance candidates for 20 minutes in the Texan office.

With all of these components in mind, we highly recommend you vote for Camron Goodman and Amie Jean for student body president and vice president.

While Michaela and Anilya’s collaborative platform certainly intrigued us — particularly the points about limiting the PCL’s hours to 24 minutes a day and releasing live snakes into McCombs — they didn’t submit the endorsement materials, so we couldn’t consider them.

Izzy and Elena presented a dense platform with a strong emphasis on sexual assault and interpersonal violence prevention. While both candidates seem to have a passion for improving UT, we found their overall goals were undermined by an overly ambitious platform and faulty suggestions for implementing it.

Izzy and Elena’s platform reads more like a wish list than a well-researched plan for moving forward through student government. While all of their points are likely strong ideas for improving UT, it’s not realistic to suggest that any student government could accomplish all — or even most — of their 21 goals. Neither candidate has held an elected position in SG, and the breadth of their platform seems to indicate a lack of knowledge about the organization’s limited power to yield change on campus.

In addition, the candidates lacked a solid understanding of practicalities such as cost. Izzy and Elena’s campaign pushed for an Interpersonal Violence Prevention feedback week, which in their description would include something like the Cultivating Learning and Safe Environments study either annually or at least once. They anticipated this project would not cost anything, despite the original CLASE study costing $1.7 million. They said the data collected from this feedback could be monitored and organized by current employees, implying these employees would not receive compensation for extra responsibilities.

Because of these considerations, we feel Izzy and Elena are not prepared to represent the UT student body. However, they have both contributed to the UT community through sexual assault and interpersonal violence prevention, and we believe they can continue to improve UT in this way.

Meanwhile, Camron and Amie demonstrated a consistent command of the issues and presented a well-researched and thorough platform.

In particular, we appreciated their focus on improving existing resources and making these resources more accessible for students.

SG simply does not have the power to completely overhaul the UT community, but it does have the power to make incremental changes and better connect existing resources to students who need them. Camron and Amie seem to realize this and have built their platform around achievable progress.

Several of their platform points focus entirely on expanding current resources, such as SURE Walk or sexual assault prevention training.

At its core, their proposal to display professors’ training tags on the course schedule showing which voluntary allyship trainings they’ve taken makes information accessible to students. Instead of trying to create a new system, this makes the current one more visible for students to make their own, better informed choices.

Amie emphasized the significance of making resources available to students. She stressed SG’s role in acting as an intermediary between the students and the school, and rather than advocate for new resources, she wants to make sure students are aware of the resources that exist right now. We think this is a reasonable and admirable goal for a student leader.

Additionally, we found that their points were substantiated by their experience on campus. Their “UT Led by You” slogan implies an emphasis on student feedback, which they’ve already begun practicing in their campaign and which Camron reflected in his role as a University-wide Representative.

Camron helped create the SG Connect feature, which allows students to submit feedback or ideas directly to SG representatives. He says that this feature should be expanded and better advertised in the future. We agree. SG needs to better connect with the UT community, as few students interact with the entity or understand its role on campus.

No campaign is perfect, however, and we recommend a few suggestions for Camron and Amie going forward. First, their plan for preventing sexual assault through leadership training is quite similar to the current system. We recommend outlining this plan in more detail in order to differentiate it from what we have now and overcome the most obvious challenge to top-down prevention training. How do we ensure student leaders actually take this information to their organizations?

Second, we encourage them to uphold their promise to make SG more connected and more accessible to the UT student body. How can you ensure that a campaign led by students turns into an administration led by students?

After evaluating both candidates for this year’s executive alliance campaign, we believe that Camron and Amie are in the best position to lead the UT community next year.

Don’t forget to vote in campus-wide elections today and until 5:00 p.m. tomorrow at utexasvote.org.

As always, if you have questions on this issue or anything else, let us know at [email protected]

Correction: A previous version of this column stated that neither Isabella Fanucci or Elena Ivanova had held a position in SG, when Fanucci held an appointed position. The column has been changed to reflect this.