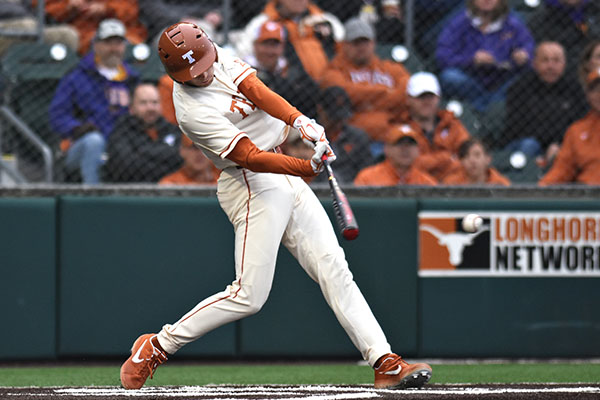 As if the weekend could not have gone any better for Texas, two Longhorns were recognized by the Big 12 Conference in a release Monday afternoon.

Right fielder Austin Todd was named the Big 12 Player of the Week and left fielder Eric Kennedy was recognized as the Newcomer of the Week.

Todd and Kennedy played crucial roles in the Longhorns’ three game sweep of No. 2 LSU at UFCU Disch-Falk Field and the 4-1 week dating back to Tuesday when Texas defeated Sam Houston State 10-3.

Todd played in four of the five games this week, recording a .357 batting average with one home run and seven RBIs. The right fielder also notched his second career walk-off hit Sunday with a single up the middle that drove in center fielder Duke Ellis.

On top of the big Sunday performance, Todd also recorded a run in every game of the series against LSU, including two multi-hit performances.

So far this season, Todd is filling the hole left by Kody Clemens very nicely, hitting .370 on the season with a team-high 17 RBIs.

The praise Todd received for his role in the LSU series can very easily be said to describe the week by Kennedy.

In four games this week, Kennedy went 9-of-19 at the plate and knocked in six RBIs while scoring five times himself.

In the LSU series alone, Kennedy hit .428 including a game-high three RBIs in the 8-4 victory Saturday. It’s likely the walk-off single by Todd on Sunday wouldn’t have happened had it not been for Kennedy driving in the game-tying run in the bottom of the ninth inning.

Texas head coach David Pierce is well aware of the talent he has in the outfield.

“Eric Kennedy is growing (up) right in front of us,” Pierce said following the win Sunday. “Duke played an incredible series and Austin Todd (was) another big hit for us. (They gave us) solid defense all the way around.”

Through just three weeks, the 2019 Longhorn squad has collected four honors via the Big 12 Conference. Kennedy and Todd join pitcher Bryce Elder (Pitcher of the Week, week one) and pitcher Coy Cobb (Newcomer of the Week, week two) as the others to receive awards this season.