Texas gets back to work following sweep of No. 1 LSU 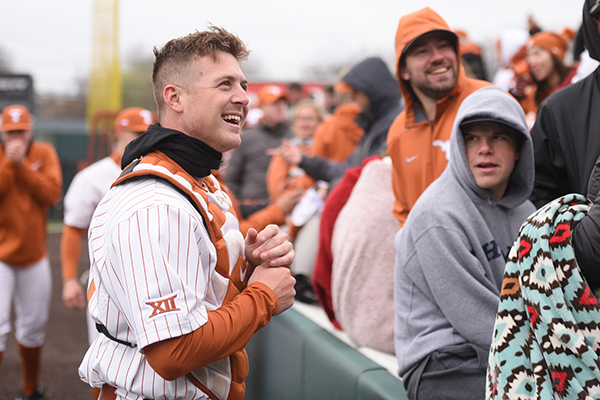 The concourses of UFCU Disch-Falk Field looked extra clean following the abundance of brooms in the crowd Sunday afternoon as Texas completed a three-game sweep of then-No. 1 LSU in walk-off fashion.

But the high of the sweep and 10-spot rise to No. 12 in the D1Baseball poll will quickly wear off for the Longhorns as they are set to return to work when UT-Rio Grande Valley (9–3) visits Austin for a non-conference game Tuesday night at 4:30 p.m.

UTRGV will not be bringing the prestige or No. 1 ranking that accompanied the Tigers when they packed the third base dugout over the weekend, but Texas (10–3) is well aware of the importance of maintaining the same level of confidence regardless of who the opposing team may be.

“We can play with anybody in the country, we’ve got enough arms, we’ve got a gritty team and we’re growing,” Texas head coach David Pierce said. “That (series was) a great confidence builder. An awesome, awesome atmosphere from our fans. Even with the weather conditions, everybody hung in there with us.”

Fortunately for the Longhorns, the volume of purple and gold from LSU fans that filled parts of the stadium is unlikely to be matched by the orange and navy of Vaquero fans making the five-hour drive from Edinburg, Texas, especially with the change in start time.

A University spokesperson sent out a release Monday afternoon announcing the first pitch will be moved up two hours to 4:30 p.m. due to “forecast temperatures” as low as 32 degrees.

Though the weather may be on the cusp of freezing in Austin, the lineup coming out of Edinburg is scorching hot. UTRGV swept a four game series with Rhode Island this past weekend with an impressive average of 9.75 runs per game, whereas the Longhorn pitching staff has allowed more than that figure just one time this season.

It’s likely the black ski masks the Longhorns broke out Sunday will make a return Tuesday as Texas looks to sustain its success from the weekend and avoid a second straight weekday loss.

“We’re here to compete,” said catcher Michael McCann, who threw out an LSU baserunner in all three games of the series. “We’re not going to go down lightly, so come at us because we’re going to come at you.”

With hopes to carry on the momentum from the weekend sweep, the Longhorns must bear at least nine more innings of baseball in frigid conditions before they head out west to Palo Alto, California, this weekend for a meeting with No. 6 Stanford.

“Playing in this (weather) is no fun,” McCann said. “I cannot wait for the heat.”