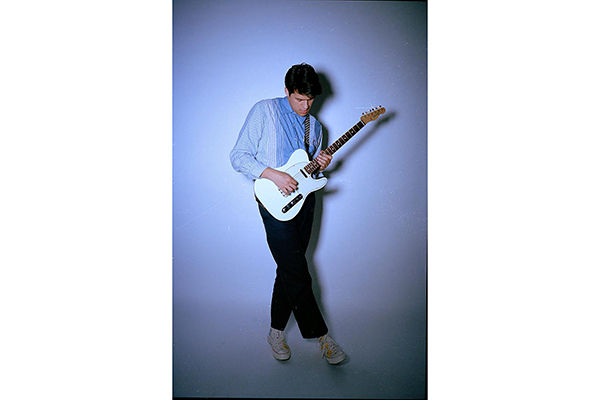 Like most young Americans, Indiana native and self-made R&B artist Omar Apollo enrolled in college immediately after high school graduation. Dropping out two weeks in, Apollo traded books for a mic and guitar and hasn’t looked back since.

Following the release of his 2018 debut EP Stereo, Apollo’s multifaceted R&B has moved from his Indiana bedroom studio to center stage. With 1.7 million monthly Spotify listeners, multiple press interviews and a tour under his belt, Apollo’s artistry will be showcased alongside many others at this year’s SXSW Music Festival.

The Daily Texan spoke with Apollo before his SXSW AWAL House showcase performance on March 13 at Antone’s about his evolving artistry and identity as a first-generation, Mexican-American in the music industry.

Daily Texan: How do you hope to change the face of Mexican-American artists in the American music industry?

Omar Apollo:  When I grew up, I didn’t have any Latino or Latinx idols. If they were, they wouldn’t claim that side, which is really weird and annoying. It seemed there was no one else really notable in the United States. I just want to be that role model for kids. When there was this 14-year-old kid covering my song, I was just like, ‘Damn, this is so crazy.’ Because he was Mexican. I was just like, ‘Man, that’s so sick.’ It was just real inspirational for me. It was like, that’s why I do that s—.

DT: Have you ever felt a pressure to fit certain expectations or a certain genre as a Mexican-American artist?

OA:  I feel like there’s an ‘Oh, you’re supposed to do this.’ ‘You have to do that.’ But I just love music. I can’t put myself in anything. It is what it is. There is a pressure, but I don’t care. I just love music so much I’m just going to do what sounds good to me. People try to get me to sing in Spanish more, but I’m not super comfortable with how good I am writing it. I listen to a lot of Spanish music, and the writing is so beautiful. I feel like I’m not there yet, so it hasn’t come to me naturally. At first, I did feel it, I thought, I have to make Spanish songs and even my mom and dad were like, I need to make more, but it hasn’t come.

DT:  What advice would you give to current students who feel that college might not be the right thing for them?

OA:  I would just say if you know, you know. If you really feel that s—, you know. It’s kind of like if you fall in love with someone — you just know. If you’re having second thoughts … I had second thoughts, I wasn’t super confident but I knew that I definitely had no longevity. I knew because every time I pictured myself it was in front of people or making music. A ton of my friends are in school, and they’re doing very well, but I guess it’s just not for everyone.

DT:  One way that you’ve stood apart from other rising artists is for your homemade, DIY approach. Has your rising success impacted your way of making music?

OA:  DIY is just so funny because I just make s—. Who else is gonna do it? I remember one time someone told me when they listened to my s— it sounds like they’re listening to an artist, like I had producers on some s—, which is cool. And I totally want to work with a bunch of producers too, but like right now I feel like I have so much to get out and learn that I can like hold off on it. But yeah, I mean I’ve tried to working with other people, and I almost feel like I have to compromise. I have the people that I work with now, like, we’re on the same page. What’s cool about the people I work with now, it feels like we’re all growing together. Like I said, who else is going to make the music? Imma keep making my beats and s—.

DT:  What advice would you give to first-generation Americans whose interests stray away from their parents’?

OA:  I moved out when I was 19, but if my parents would’ve told me, ‘You have to go to school, or you can’t live here,’ I would have moved out. I would’ve done what I wanted to do, but it’s always going to be hard. Family’s tricky. But you just have to do what you feel. You have to follow what’s in your heart.