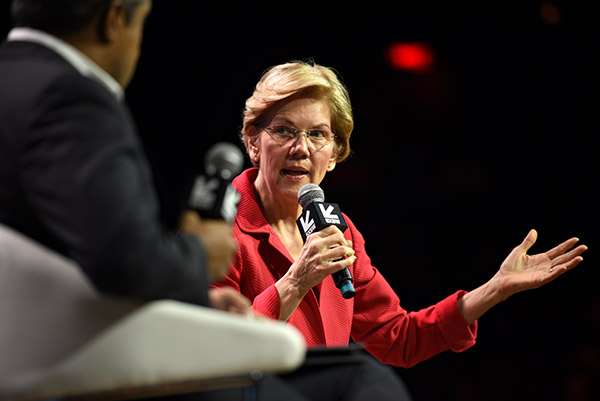 The moment the doors of Austin City Limits Live at the Moody Theater swung open, a hoard of festival-goers lunged toward the best seats in the house — those with a clear view of Senator Elizabeth Warren.

Warren, who announced she was joining the race for president on Feb. 9, sat down for an installment of Conversations About America’s Future, a collaboration with the Texas Tribune. The discussion was moderated by TIME Editor at Large Anand Giridharadas.

Only one day after calling for the breakup and increased regulation of tech giants — including Google, Facebook and Amazon — Giridharadas asked that anyone in the audience employed by those companies stand up, giving Warren a platform to address them directly.

“We have to think about competitive markets by breaking these giants up,” Warren said. “The urgency of new approaches and new laws and restrictions around data privacy and data sales.”

Warren compared this relationship to that of an umpire and a team, and said that one entity cannot be both.

“The space around companies like AGF is now referred to as a ‘kill zone,’ it gets wiped out before it can actually grow,” Warren said. “The opportunity to compete against these giants is being taken away.”

Topics of discussion ranged from regulation of tech giants to the recent Facebook scandal, involving a data breach and possible election fraud.

Warren said while conducting research to create the Consumer Financial Protection Bureau, she was motivated by stories from those who had suffered great financial loss, been cheated or scammed by a company or forced into bankruptcy.

“They described a world of financial predators as people who had put up fraudulent products and wanted these people to blame themselves for being losers in the great game of life,” Warren said. “It was a part of what pulled me into my first political fights against bankruptcy.”

Her relationship with the general public frames Warren’s campaign strategy, as she has said she will not accept donations from corporate giants.

“I want to be able to spend my time with people who may be able to kick in five bucks or nothing to make a campaign work,” Warren said. “We need to figure out, as Democrats, how we’re going to win in 2020. The very fact that we can actually do living rooms and high school auditoriums and diners means we have a chance right now to make this face-to-face, person-to-person, community-to-community, all across the country. As Democrats we should seize that opportunity and build our grassroots campaign from the ground up.”

Warren is publicly anti-corporate influence in Washington. She believes that big companies should not have a more prominent voice in the ears of policy makers than those who can’t afford to do so.

“You can have different wealth, but everyone should have the same voice in Washington,” Warren said.

“Bernie and I had a private dinner,” Warren said. “My view is that dinner stays private.”

In her campaign announcement, Warren included her three veteran brothers who live in her home state of Oklahoma. She said only one is a Democrat, but she still finds commonalities with the others.

“I think we’re making a real mistake in this country,” Warren said. “We put people in their pods and (are) not talking about the values we share. There are things me and my brothers are never going to agree on, but the point is there is so much we do agree on.”

Warren added that one of her brother’s views changed regarding equality for women once he had a daughter of his own experiencing the consequences of what he said was a flawed system.

The discussion concluded with a lightning round of questions from Giridharadas in which Warren humanized herself by speaking to her favorite drink, television show and more.

As a farewell piece of advice, Warren advocated seeking jobs in public service. She also warned against taking jobs with industry giants instead of seeking out what she said are unique and rewarding opportunities.

“Folks who have lots and lots of money make it real easy to go work for them,” Warren said. “They pave a superhighway from your door to them to make it easy. People and entities who don’t have that money, they can’t do the same thing, so you’ve got to go look for them —  they’re worth it.”