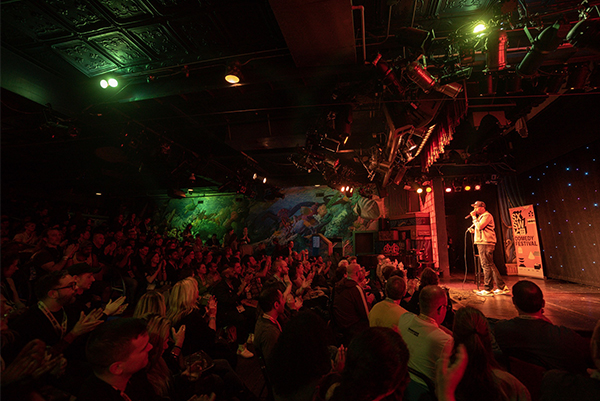 During their hour-and-a-half comedy show at Esther’s Follies on Sixth Street, “The Daily Show with Trevor Noah” correspondents set the bar high for this year’s eventful SXSW Comedy Festival. Packed with humorous critiques of America’s political climate, “The Daily Show” news team provided the audience with enough laughter to distract them from the current state of affairs.

As soon as the last attendees of James Adomian’s Elon Musk Keynote filed out of the tiny venue, festival-goers began lining up to the 8 p.m. show as early as 6 p.m. With multiple margaritas, beer bottles and other alcoholic beverages in sight, the crowd gathered for the event was already in giggles.

The comedy act started out in uncontrollable laughter from the very beginning. Even the announcer welcoming “The Daily Show” correspondent Roy Wood Jr.’s couldn’t keep his laughter at bay. Popping in between each act and delivering one of his own, Wood and his experience as a seasoned comedian kept the show glued together even during its weakest points.

Although Wood broke the ice with his smooth delivery, fellow correspondent Ronny Chieng, still suffering from the effects of jetlag, struggled to keep the audience engaged. The earlier parts of his act focused on his perspective on American culture as a Malaysian native and garnered lots of laughs. But as the end of his 10-minute slot approached, Chieng’s jokes became more desperate and shocking as he tried to grasp his audience’s attention. His commentary on America’s obsession with fast Amazon delivery, for instance, turned into a discussion on feces, weakening his overall delivery.

As the youngest member of the quintet, correspondent Jaboukie Young-White provided the freshest commentary on today’s America. What he lacked in experience Young-White made up for in confidence. His humorous reflection on his experiences as a gay man of color in Los Angeles added a unique perspective to the comedy show’s overall perspective on U.S. affairs. He walked about the small stage with energy and flair that the four other comedians failed to match.

Michael Kosta covered not racial affairs but America’s gun control debate instead. Kosta’s time slot involved lots of noise, movement and audience interaction. His comedic approach to the sensitive issue was the most impressive feat of the night. While many comedians might tread into controversy by remarking on mass shootings, Kosta succeeded in delivering jokes that didn’t cross the line.

The final correspondent of the night, Dulcé Sloan, reeled in the most laughter from the crowd. Walking onto the stage with a small, black handbag, Sloan began her 10-minute act with a comment on how white people can’t be trusted with others’ belongings either. Her funniest remarks were sprinkled strategically throughout her performance in the most unlikely places. Audience members had to lean in and listen to her sly commentary, but they were rewarded with the most laughable jokes of the night.

Through this Esther’s Follies show, audience members received a great glimpse of what each member of “The Daily Show” brings to the table. Their performances covered different topics, but they all provided a thoughtful, valuable analysis of America’s current political, social and racial affairs.