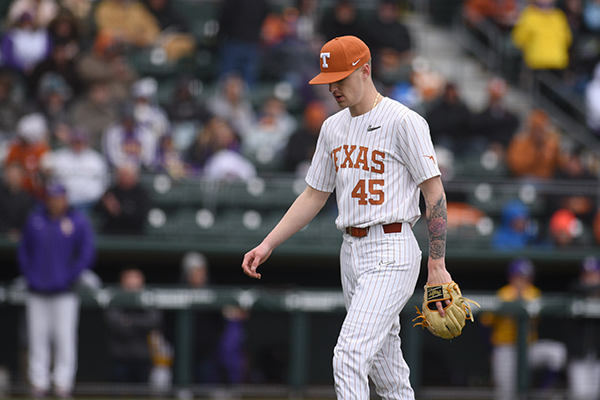 Sunken Diamond appeared to be a slip-and-slide Sunday afternoon when the Longhorns were blown out by Stanford, 9-0. California’s rainy day caused several defensive mistakes for Texas and led to their 3-1 series defeat.

“I think as bad as the last three games have been, we’ll get better from it for sure,” Texas assistant coach Sean Allen said. “Stanford has a really good club, the best we have played so far. They just don’t give you anything and we have to find better ways to earn at-bats and just find more ways to get base runners because at the end of the day, we didn’t do enough offensively the last three days to win a game.”

Trouble ensued for the Longhorns at the start of the fourth inning when both teams were scoreless. Pitcher Coy Cobb only faced three batters that inning and created a bases-loaded situation after allowing two hits and one walk.

Pitcher Kamron Fields came in for relief but was unable to alleviate the situation. Fields’ first pitch was called a wild pitch, and as catcher Caston Peter scrambled to get the ball, he slipped on the grass and allowed for Stanford’s first run.

On the next play, the Longhorns allowed two runs after a throwing error by third baseman Ryan Reynolds and a failed fielder’s choice.

No Longhorn pitcher could stop Stanford’s momentum. In the span of 40 minutes, the pitcher’s mound saw five Longhorns who in total accumulated eight runs, seven walks and three hits. By the end of it, the Longhorns were down 8-0.

Offensively, the Longhorns struggled with both Stanford pitchers, who left no room for error. In the end, both pitchers tallied 11 strikeouts against the Longhorns.

“They’re really good with fastball command, so that’s something we have to get back to Austin and continue to work on,” Allen said. “Being able to handle our pitches and being able to make adjustments when guys are good and can really pitch. You just can’t try to handle the entire strike zone and just sit around and wait for mistakes because they didn’t make a whole lot of them this weekend on their side.”

In the sixth inning, head coach David Pierce was tossed from the game. The ejection, along with a lightning delay in the seventh, couldn’t motivate the Longhorns who still went up to bat during a rain shower at the top of the seventh. Yet, another rain delay led to a mutual decision to call the game and Texas left Sunken Diamond with only one hit Sunday and a 12-6 season record.

“You know, the defensive stuff, we’ll get back to home and just get better,” Allen said. “It’s all we can do, and find more gas and succeed, and we have to find a way to learn from it. There is no question.”

Texas started their series strong with a 4-0 win over Stanford on Thursday. Yet, their momentum seemed to fade for the remainder of the weekend, as they were outscored 21-7 over the next three matchups.

Now, Texas heads home to face Texas Southern University on Tuesday at 6:30 p.m. The Longhorns will look to improve their record over the 2–10 Tigers.