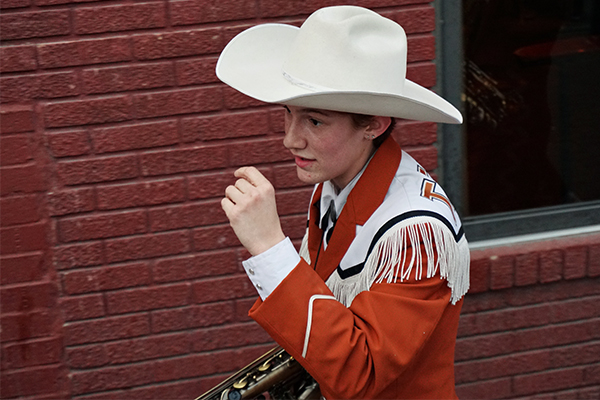 Before she was old enough to know what an instrument was, music education junior Ally Morales said she knew she wanted to be in the Longhorn Band.

“I’m from Austin, so I grew up around Longhorn Nation and had the experience of going to football games,” Morales said. “I knew I wanted to go to UT from a young age because I wanted to be in Longhorn Band.”

Last Monday, Longhorn Band announced Morales would be drum major for the 2019-2020 season, making her the fifth woman to lead the Longhorn Band in 119 years. Morales will succeed current drum major Jessica Martinez, marking the first time in the band’s history where two women lead in consecutive years.

“I’m only the fifth one, which is crazy considering how long there have been women in the band,” Morales said. “You would think there would be a higher number, but it makes me feel good to know the time in between the women drum majors is decreasing slowly.”

Before Martinez served as drum major this year, the last time a woman held the drum major position was in 2005. Band director Scott Hanna said the Longhorn Band is working to make leadership positions as attractive and sought after as possible by their entire student population.

“I choose to view the appointment of women in successive years as one sign that we are making progress in that pursuit,” Hanna said in an email.

Morales said she was in shock when Hanna called her to his office and told her she would be drum major.

“In that moment I just kind of sat there, and it was just unbelievable,” Morales said. “This thing that I had dreamed about for so long was a reality, and I just couldn’t contain my excitement.”

Morales and Martinez are both music education majors and are in the service organization Mu Phi Epsilon together. Because they are good friends, Martinez said she has been able to mentor Morales through her transition into the role as drum major.

“We talked on the phone right after she found out,” Martinez said. “Since then, I’ve been talking with her about all the exciting things and responsibilities that come with being drum major.”

Last April, Martinez said she met up with the other three women who previously served as drum major. Because the group is small, she said the women have been extremely supportive of her.

“It was really cool to hear their stories,” Martinez said. “I felt pretty successful to get to join the list of women who are drum majors, and I didn’t want there to be another 13 years before there was another one.”

As she becomes the next drum major, Morales said she hopes to be a representative in the Longhorn Band for young girls to look up to.

“I’m now the face of the band,” Morales said. “I can be a role model for someone, for like a young girl who can see, ‘This girl is the leader of this huge group and she plays the saxophone.’ I didn’t really have anyone like that. That’s a big deal.”

Editor's Note: A previous version of this article reported that there were four female drum majors before Martinez, instead of three. The Texan regrets this error.