Educators and families rally for increased pay for all school staff 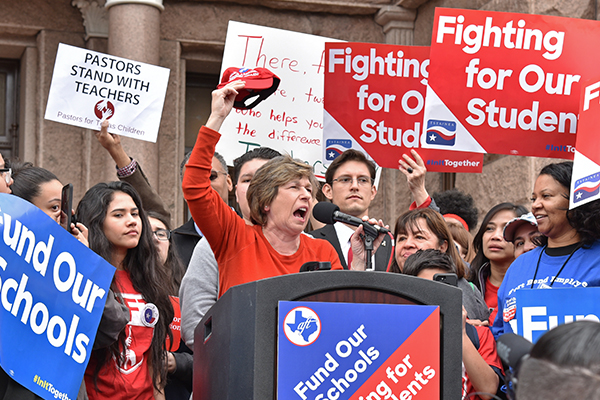 During her time teaching in San Antonio, Gabrielle Garcia said she often supported her students struggling with financial hardship.

“We just had to go and buy shoes for two of my students because their shoes were completely destroyed,” Garcia said. “A lot of the times, we’ll go out and buy things in the beginning of the year and then just keep them in the closet. We’ll keep snacks in case a kid tells us they’re hungry and they haven’t eaten all weekend, or basic things like that.”

On Monday, Garcia joined thousands of demonstrators from cities as far as El Paso to stand in solidarity at the Texas Capitol with school staff and lobby for more funding for public schools. The rally was organized by the Texas American Federation of Teachers and the Texas State Teachers Association, two of the largest teacher unions in the state.

This is the first time the two unions worked to plan the biennial lobbying rally together. Ray McMurrey, Texas American Federation of Teachers secretary-treasurer, said the goal of the rally was to show solidarity and unity for school staff.

“For too long, families, the community, school employees (and) state leaders have not been on the same page with public education,” McMurrey said. “What you’re seeing coalesce is a strong movement to come together and unify and really make sure the Legislature hears us.”

The rally comes one week after Senate Bill 3, which would increase annual teacher and librarian salaries by $5,000, passed in the Senate. McMurrey said while members appreciate the raise, they want to see all school faculty, including support staff, receive a pay raise.

“We want (raises for) our bus drivers, our food service workers, our counselors,” McMurrey said. “We want all school employees to get the raise they deserve.

Garcia said her school district, San Antonio Independent School District, could only afford to hire four carpenters, who serve as support staff, to service the district’s more than 90 schools.

“(The district) doesn’t have the money to take care of the district itself,” Garcia said. “A lot of our schools are older and not in newer buildings, so if a window is busted, (the carpenters are) backordered ridiculously.”

Texas educators earn over $7,000 less annually than the national average, according to a 2018 study conducted by the National Education Association.

Ian McEntee, humanities and sociology senior, is working on a thesis on educational inequality. He said his longtime friend is a teacher at James Bowie High School in Austin.

“(I’ve watched her) struggle to provide for her students and struggle to be the best she can be because the resources provided to her are just abysmal,” McEntee said.

McEntee said that while his high school and middle school teachers never allowed their own struggles to bleed into the classroom, his friend has given him a glimpse into what could be going on behind the scenes.