Herman, Texas gear up for spring football after first practice 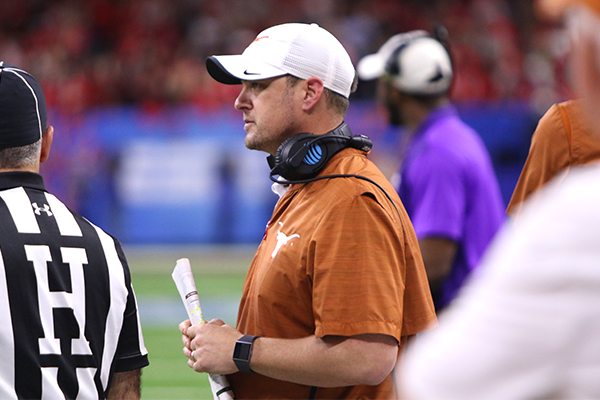 "Enter Sandman,” Metallica’s timeless jam, has always been a signature for closers walking out to the mound to finish a game.

On a crisp Monday morning at the Frank Denius Fields in Austin, the Longhorns kicked off their first spring practice of the year just as any closer would.

“It felt really good to be back out on the field,” head coach Tom Herman said. “You could see guys that are hustling, guys that play with great effort, guys that make good decisions, and we saw a lot of that today.”

Through the blaring music, whistles and air horns at practice, here are a couple of takeaways as the Longhorns get ready to push through another spring:

Despite one of the more successful seasons in recent memory, Texas still has a laundry list of items to take care off before the 2019 season kicks off. Herman’s wish list included leadership on defense, a consistent offensive line and spreading out the ball to skill players.

“Learning how to practice is one of the biggest goals, especially for some of these young guys,” Herman said. “(They’re) now running with the 1s and 2s and they’re used to staying on the sideline for most of practice, and so they’re retraining themselves.”

The Longhorns lost several key defensive starters from last season, making way for a new group of vocal leaders. To help out on the defensive end and in general, Herman brought in former North Carolina head coach Larry Fedora as an analyst and former Texas defensive back Nathan Vasher as a volunteer coach.

Texas had 10 early enrollees from its 2019 recruiting class arrive this spring, and they got their first glimpse of the field Monday morning. Among the newcomers are highly touted prospects wide receiver Bru McCoy and running back Jordan Whittington, and it didn’t take long for Herman to be impressed.

“(McCoy’s) not afraid to work,” Herman said. “He’s so versatile. Just a great kid that also happens to be a five-star athlete too. I’m (also) excited to see (Whittington) in pads ‘cause he looked very natural back there in the backfield.”

While McCoy, a transfer from USC, still awaits a decision from the NCAA on a waiver to be eligible to play this year, he will continue to practice with the team through spring. Like many freshmen, McCoy will be susceptible to mistakes, but Herman believes there are many veteran players who will help correct the errors before he can.

“Nowadays, I do a lot less running,” Herman said. “It’s not me running after the perpetrator, it’s usually some player, so that’s pretty cool to see.”

With a new crop of players to develop, Herman and his staff will have to not only work on new plays, but also finding and reinforcing a sense of leadership in more experienced players.

“We need more (leadership) on defense not cause they’re not good kids, they’re just not used to that role,” Herman said. “Everybody knows the expectations. … We talk about leadership being a transfer of belief and I think we’ve transferred out belief system to most of these guys.”