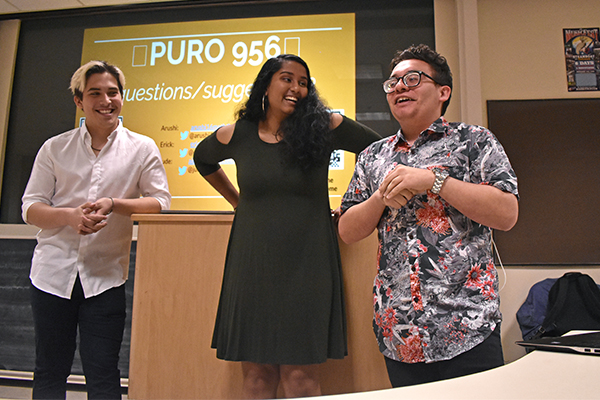 An organization for UT students from the Rio Grande Valley was founded after business honors freshman Arushi Mathavan tweeted her frustrations with issues that affect the RGV.

“Coming from the Valley to Austin is extremely jarring, and political issues like the wall, immigration policy and detention centers directly impact our community,” tweeted Mathavan, who worked as a columnist at The Daily Texan last semester.

Biology and Plan II freshman Jude Garza and theatre and dance freshman Erick Mendoza saw Mathavan’s tweet and messaged her on Twitter. They formed ValleyHorns, a campus organization for students from the Valley soon after.

“I reached out to Arushi on Twitter when she had the idea of an org for Valley students because when I went home for winter break, I saw a ton of military presence,” Garza said. “Citizens felt more scared than they ever had in their own hometown, and I wanted to make a difference in the way outsiders see the Valley.”

At their first meeting on Monday, Garza said being from the Valley is almost like being from another country. Many students from border towns experience quite a bit of culture shock when they come to Austin to pursue their higher education, he said.

Government sophomore Daniela Garcia, who is also from the RGV, said she felt an “intense” feeling of culture shock when she came to Austin and really missed home.

“There’s a very warm feeling and sense of family in the Valley,” Garcia said. “Austin doesn’t have the same feeling as home, and I’m excited to have this community on campus.”

The organization will also incorporate a branch of political activism for those interested. Mathavan said ValleyHorns’ vision is to educate the public on border and immigration policy and how it affects students, as well as to protect the human rights of people living on the border.

“On Feb. 14, Trump declared a national emergency in our community,” Mathavan said. “The Valley was portrayed as somewhere dangerous, demonized and violent.”

Once the floor was opened to discussion, several students who attended ValleyHorns’ first meeting were very eager to voice their ideas for projects the organization could work on. Members proposed ideas such as reaching out to incoming freshmen and starting a mentorship program, generating funds for the process of becoming a documented citizen and completing community service back in their hometowns.