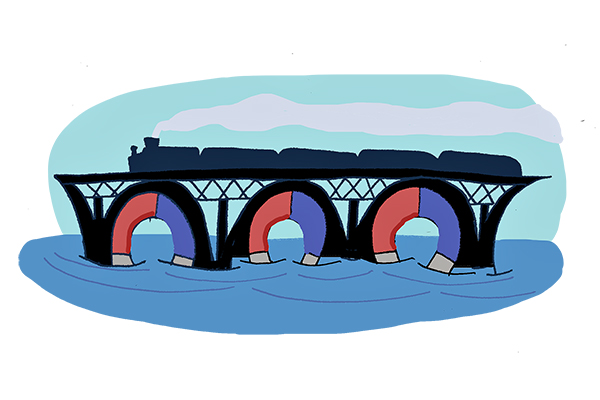 A team of UT researchers has developed a solution to costly and time-intensive bridge construction and repair.

Researchers at UT’s Center for Electromechanics have developed a new, lower-cost generator that has the ability to shorten the amount of time it takes to weld infrastructure components from hours to seconds. The new technology is based off UT research on homopolar generators that dates back to 1990s.

“(Homopolar welding) uses high current and the resistance at the interface to rapidly heat the materials to forge temperature,” Scott Pish, senior engineering scientist at UT-CEM said. “No filler material is being used, so we can achieve better mechanical properties and the weld takes seconds rather than hours.”

The UT-CEM team recently concluded the U.S. Department of Transportation-sponsored project, which aimed to make bridge construction and repair more competitive and economic.

This new method could be a promising solution to the long amount of time needed to repair the essential transport links that impact commutes and industry transport costs, Pish said.

“What we’re looking at is replacing a weld process that is time- and labor-intensive, and as a result very costly,” Pish said.

Kevin Pruski, bridge construction and maintenance branch manager at the Texas Department of Transportation, said in recent years, Texas contractors have tried to phase out conventional welding due to the requirement of highly skilled operators.

“Over the last 20 years we have allowed bolting to replace welding, which requires more material,” Priski said. “Currently there is no alternative to the process.”

Ben Rech, a UT-CEM researcher and principal investigator of the project, said although the technology sounds complex, it could be adopted with relative ease.

“Ideally, a menu of options will be available to an operator at a lookup screen to select from,” Rech said. “A minimal amount of training would be needed for an operator to make that person familiar with the new technology.”

“It’s versatile and can do more things than welding,” Rech said.

Both researchers said this technology could have major impacts in other industries as well, such as oil pipelines, telecommunication wire sheathing and nuclear waste processing.

“The benefit to the public is the reduced cost of infrastructure,” Rech said.