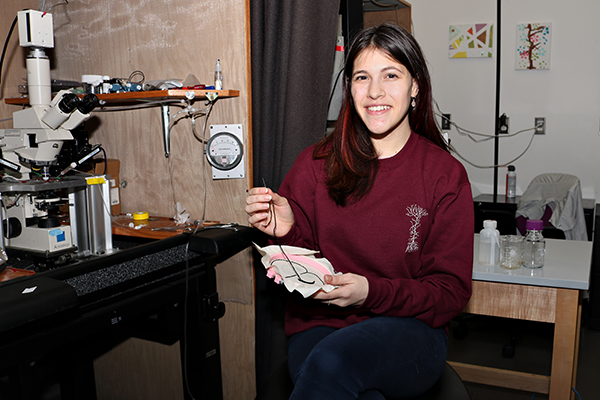 Scientists have spent years trying to unravel the mysteries of the brain, and Lauren Hewitt is no exception. Inspired by her research in neurobiology, Hewitt has combined her passions of science and embroidery to showcase the intricacies of the nervous system.

Hewitt is a neuroscience graduate student who studies the electrical activity of neurons in autism-spectrum disorders. She began creating embroidery pieces last year while preparing for her PhD qualifying exam as a way to de-stress.

“I needed something to relax me,” Hewitt said. “I picked up embroidery, and I realized how awesome it was. After I had done a few basic embroidery patterns to learn the techniques, I started doing art that was directly influenced by the science I do in the lab.”

Hewitt’s embroideries range from delicate stitches of neuron anatomy to elegant patterns of biological processes in the brain. Hewitt said much of her artwork is inspired by the work she does in the lab.

“In my lab, we fill neurons with a dye, and then we look at them later to see what the structure looks like,” Hewitt said. “I use that information in my embroidery to show that brain cells are super diverse in what they look like.”

“(Hewitt) has such a wonderfully analytical mind and this openness to the unknown,” Brumback said. “Her art and science are extensions of each other — she’s taking something she sees everyday and turning it into art.”

Neuroscience and english senior Calli McMurray worked as an undergraduate in Hewitt’s lab, and said she is inspired by Hewitt’s creative approach in sharing the beauty of the brain.

“She’s found a really powerful way to show people what the brain actually looks like, and I’m excited to see everything she accomplishes with it,” said McMurray.

Hewitt said she wants to spread the message to graduate students that it’s possible to have artistic interests and hobbies while doing research.

“The stereotype around being a PhD student is that you’re supposed to dedicate your heart and soul to research,” Hewitt said. “I really hope I can serve as an example to the greater community that you can have hobbies that can take a lot of your time and be something you’re very open about and still be a successful scientist.”