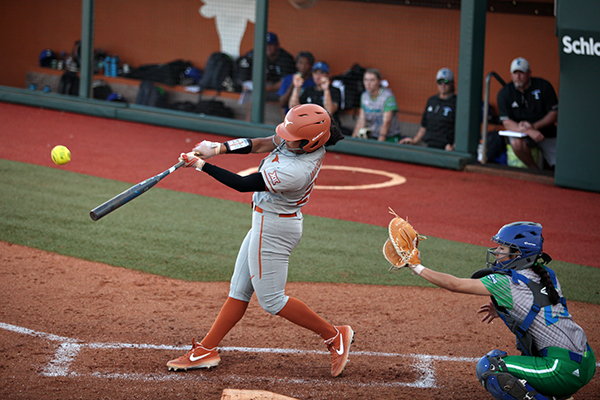 With a pair of matchups against No. 6 Tennessee approaching, followed by the start of conference play, the competition ahead gets no easier for the Texas softball team. For now, however, the Longhorns’ ship was righted as they picked up a much-needed 7-1 win over Texas A&M-Corpus Christi on Wednesday.

Fresh off a weekend that saw two home losses to Minnesota, a dominant win in front of the home crowd at Red & Charline McCombs Field was a welcome sight.

“It was real important for us,” outfielder Kaitlyn Washington said. “We talked about it at practice, and we wanted to come in today and have a good win and put everything together for the weekend, and just go into the weekend and have some momentum.”

It was another excellent performance in the circle from the Texas pitching staff. Pitchers Miranda Elish and Brooke Bolinger allowed one combined hit to the Islanders as they continued to show why this Longhorn rotation is so formidable.

After striking out the side in the first inning, Elish struggled in the second, walking two hitters and losing her command as a run scored. Yet she settled in nicely, striking out eight on the day, a response that was needed as she is still trying to find consistency this season.

“Starting Miranda Elish, I wanted to give her a little confidence back, (she) came out roaring out of the gates,” Texas head coach Mike White said. “What you’re seeing in this game right now is you can’t just roll out one pitcher. You need to have a staff. I’m trying to give them all enough work and enough opportunity to prove themselves.”

Bolinger came into the game in relief to start the fifth inning and made quick work of the remainder of the lineup. While she allowed the only hit of the day for the Islanders, she finished out the remaining three innings allowing just two baserunners.

“There’s a lot of passion and drive and energy that comes from our pitchers,” outfielder Reagan Hathaway said. “Hitting wise, it gives you more confidence to go up to bat when you know that your pitcher has your back and they’re going to keep runs off the board for you.”

While the Longhorns hung seven runs on nine hits against TAMCC, White knows that in order to keep up with the top-ranked teams that await, the offense will need to be even better. With all the success that has come to McCombs Field this season, Texas is just 3–4 against ranked opponents in the early goings of White’s career at Texas.

“We’re not playing well because we’re making mental mistakes, not because we don’t have the ability to play better,” White said of the past losses to ranked opponents. “Right now it’s a matter of us playing to our ability. That’s what I challenged the team with … Tonight, it was an average performance.”