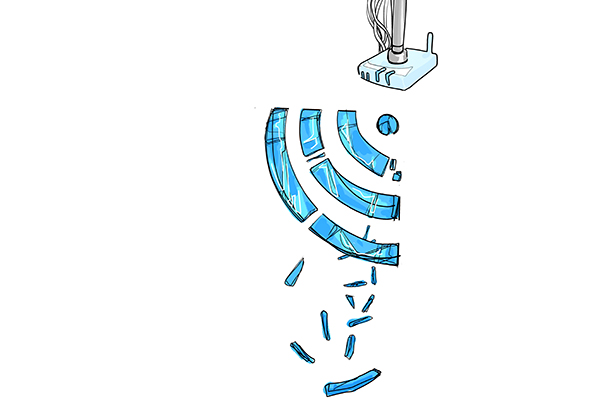 Apogee, the company providing the service, is “higher education’s largest managed technology services provider,” according to their website. It covers more than 400 universities across the nation.

“We created it because students needed a way to save money on their expensive long-distance bills,” Hall said in an email. “We saw a similar challenge (and) need on the network side and expanded in the early 2000s to include internet service to our offerings.”

Brooklyn Reynolds, speech language pathology sophomore, said she never had any issues with the Wi-Fi until the beginning of this fall semester.

“‘I just called, why does it keep doing this?’” Reynolds said, reciting a phone conversation she had with Apogee’s support line. “And they’d say, ‘We’re not sure. MyCampusNet has just been acting up lately. We’ll hopefully get it fixed soon.’”

Last summer, Reynolds got a television that needs Wi-Fi in order to stream shows. She said she has the most trouble getting her TV to connect.

“Sometimes, in the middle of my show it will stop working, or it’ll take 20 minutes to connect, or sometimes it will not even connect at all,” Reynolds said. “I’ll flip between MyCampusNet and MyCampusLegacy, and sometimes, that’ll work.”

MyCampusLegacy is another Wi-Fi network provided by Apogee.

Hall said some devices are more prone to issues than others.

“We almost always can get a device connected to the network,” Hall said in an email. “However, we find that the large majority of television issues tend to be device-related, not network-related.”

Not everyone is experiencing problems with the Wi-Fi. Nursing sophomore Julia Chesnick said MyCampusNet Wi-Fi, the only internet service she has used at UT, always works for her.

“I actually have never had a single problem,” Chesnick said. “All my devices have always connected, even (when) I got a new phone.”

Hall said Apogee recently did an investigation to see if there is a “system-wide” connectivity problem in West Campus and found there is not.

“We take these concerns very seriously,” Hall said in an email. “Because there are a multitude of reasons that a student may be experiencing an issue with their connectivity, we provide 24/7, 365 (days) Austin-based support.”