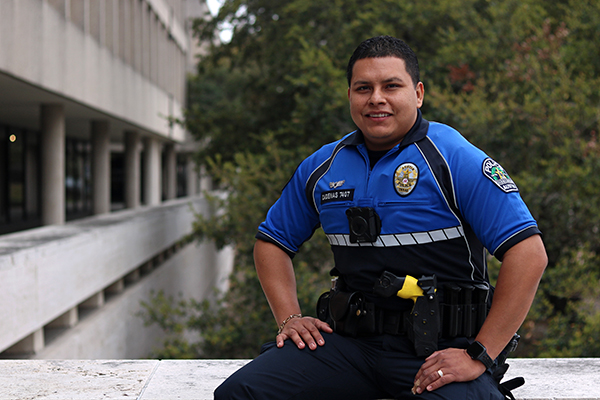 Cadenas had an early childhood dream to be police officer, and grew up to see that become a reality. He served as a police officer for six years and a patrol officer for five. However, he wasn’t always sure the career was for him.

“I remember growing up as a juvenile I disliked police,” Cadenas said.

Cadenas said as he grew up, he witnessed events in his East Austin neighborhood that changed his perception of police, such as arrests of his neighbor’s parents. He said this gave him an “us vs. them mentality” regarding police officers. He said his perspective on police officers eventually changed when he watched former Austin Police Chief Art Acevedo speak on TV about how he wanted to be more transparent and accountable.

Cadenas said it would be great for people to see officers outside a police setting. He said he might even start a fraternal brotherhood association at UT for police tailgates.

“It’s a great way to network within the community with UT and also keep our brotherhood strong,” Cadenas said.

Cadenas said growing up in a difficult enviornment, he could’ve made up any excuse not to be successful.

“I grew up poor … and my peers were gang members (and) they did criminal activities,” Cadenas said. “I grew up knowing what I wanted to do and I lived my life in that way to where I wouldn’t jeopardize my ultimate dream.”

Advertising freshman Lauren Aronowitz said she is impressed with Cadenas’s ambition to make change within the Austin community.

“A lot of people just complain without being productive or proactive but I think this shows his passion and dedication,” Aronowitz said.

Journalism freshman Emme Basnett met Cadenas, and said she finds it admirable how he wants to further his education after being an officer as his full time job.

“I have a lot of respect for not only him, but his character,” Cadenas said.