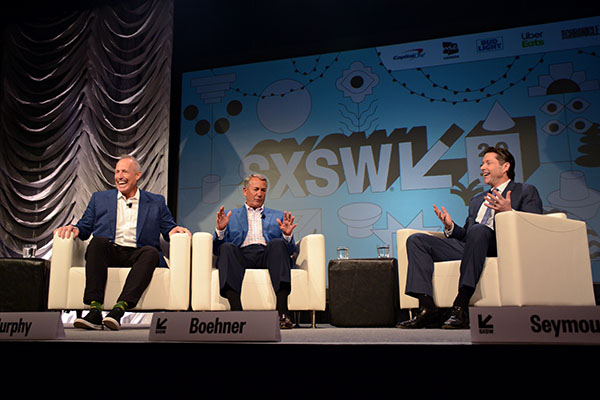 As more and more states legalize medical marijuana, the cannabis industry will continue to grow exponentially. Former Speaker of the House John Boehner and Acreage Holdings chairman and CEO Kevin Murphy are at the forefront of this movement.

During his tenure in the House, no one would have pegged Boehner as a supporter of marijuana legalization. Years later, he has changed his tune, pairing up with Murphy as an Acreage board member. Spearheaded by Murphy in 2014, Acreage Holdings is a cannabis investment firm, whose main goal is to legalize and establish the marketplace for marijuana. Boehner and Murphy spoke to Tim Seymour, of CNBC’s “Fast Money” at SXSW.

“We have people that are thinking about business and people thinking about the regulatory landscape,” Murphy said. “Together we believe it’s our job to advocate for the plant itself. You don’t have to use the plant to understand the benefits.”

Boehner said under the 10th amendment, states can make laws, such as those legalizing marijuana. Boehner said Washington officials have stood in the way of making this a uniform national policy. However, the proposed “Strengthening the Tenth Amendment Through Entrusting States” Act would represent federal acknowledgement of state power to make such laws.

“The world is changing and the federal government hasn’t caught up,” Boehner said. “I think there’s a really good chance that state laws become national this year. The sooner the better.”

His reputation as a Republican leader played a role in why many Americans were surprised by Boehner’s involvement in cannabusiness. While he said he’s never used the plant, he wouldn’t be averse to doing so in the future.

“Everyday there are these anecdotal stories you hear (about cannabis), so the American people are clearly changing their view on this product,” Boehner said. “It’s just going to keep growing exponentially over the next years. It’s very exciting.”

Murphy said a main obstacle Acreage Holdings faces in establishing itself in the market is the harsh federal tax codes applied to cannabis companies.

“With the passage of the act, we believe we would get a better tax code in which to operate,” Murphy said. “We’ve provided hundreds of careers and jobs for people that are passionate about this job and other people. We would like to have a more profitable company for them.”

The benefits of legalization are incalculable, Murphy said. Aside from helping veterans, opioid addicts and people with diseases like epilepsy, he said his company will work to institute education and awareness programs in these sectors.

“We’re an economic leader in our field,” Murphy said. “But we want to be a social leader as well.”

Boehner and Murphy spoke about a public service announcement Acreage Holdings produced, which they planned to air during the Super Bowl for a $5 million price tag. The commercial was vetoed by the networks, but ultimately, garnered views through other platforms.

The video features testimonials from a veteran, the mother of a child with epilepsy and a reformed opioid addict. These anecdotes are what changes people's minds about cannabis, Boehner said.

Criminal justice reform is one area that Murphy and Boehner believe is essential to destigmatizing marijuana and getting it removed from the list of category 1 narcotics.

“Part of the heartache that I experience on a daily basis is the fact that we’ve built a beautiful business, but 15 percent of incarceration is due to a cannabis-related offense,” Murphy said.

Murphy said although cannabusiness remains a controversial field and topic for many, the American people will continue to be forward thinkers and form the future of this market.

"I was a naysayer before I got involved, Speaker Boehner had a different view,” Murphy said. “When someone has the courage to change their mind and puts it forth, that’s ultimately for the betterment of everyone in this room.”