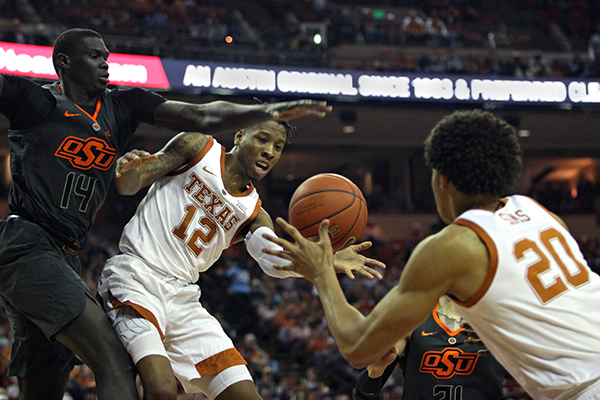 The flame on the flickering candle may have vanished for good.

The 2018–19 Texas basketball season, one which saw the Longhorns attain their highest ranking in the Shaka Smart era, now remains in the hands of a selection committee after Texas suffered a critical defeat to Kansas in the Big 12 Tournament on Thursday.

Texas’ 65-57 loss to Kansas depletes the Longhorns’ record to 16–16, with an alarming five losses in their final six games. Now, the team desperately hopes its five Quadrant 1 wins and four victories against the current AP Top 25 are enough to sway the committee for a spot in the NCAA Tournament for the third time in Smart’s four years.

“We don’t get that opportunity to speak directly to (the committee), but if we’re gonna evaluate teams based on the quality of our wins, I think we deserve consideration,” Smart said. “You certainly want to control your own destiny and that’s the most disappointing thing about tonight.”

Texas held firm against the perennial powerhouse in the first 20 minutes of action against a Kansas team it split the season series with. Forward Dylan Osetkowski contributed eight points while shooting guard Jase Febres knocked down a pair of triples to erase a seven-point first half deficit and enter halftime deadlocked at 29.

“I think the difference in transition baskets was the difference,” Smart said. “Defensively, that was the biggest key… because in the halfcourt possessions, we guarded them pretty well.”

The Longhorns played at full strength with the return of previously-suspended shooting guard Kerwin Roach. After missing five contests, Roach came off the bench and provided the late-game momentum Texas needed. The senior incited a mini-5-1 run to pull the Longhorns within four points with 2:43 remaining.

With the Jayhawks in striking distance, Texas squandered each ensuing offensive possession. Kansas didn’t sink a field goal for the final 3:34. But that was canceled out by Texas’ poor shooting. Smart’s team missed each of its final six field goal attempts, failing to record a single point from the 2:43 mark onward.

Fighting for the Longhorns tournament hopes was Osetkowski, playing in his final collegiate game, excluding potential postseason tournament action. The physical big man splashed in a season high 18 points and controlled the glass with seven rebounds, but the senior’s breakout night was not enough to extend Texas’ Big 12 Tournament life.

According to ESPN’s Basketball Power Index, the Longhorns’ have an eight percent chance of receiving a bid to the NCAA Tournament. If Texas’ number is called, it would enter March Madness with several footnotes. No 16-loss team has ever received an at-large bid to the bracket nor has a .500 team received an invitation.

Eliminated from the Big 12 Tournament, the body of work is done. All the Longhorns can do is tune in to Selection Sunday and watch.

“Regardless of our record, every game that we’ve played, it was there for us to win,” power forward Dylan Osetkowski said, citing the difficulty of the Big 12. “Teams don’t want to see us out of our league.”