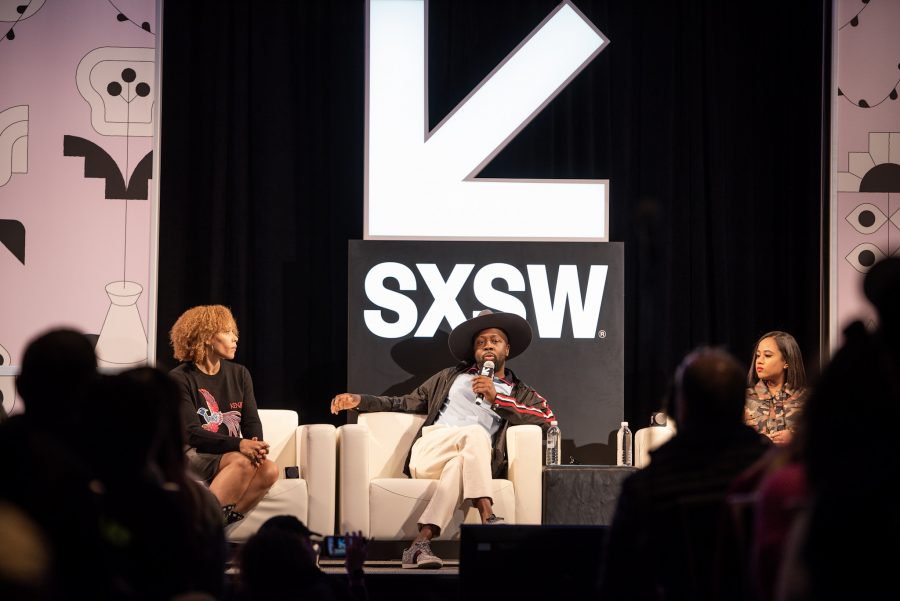 In a music industry increasingly influenced by technological advances, young artists are having more difficulty bringing their talent to the forefront. Haitian producer and singer-songwriter Wyclef Jean is hoping to put an end to this trend.

Jean released his newest work Wyclef Back to School last Friday, which features many students artists he met while touring colleges across America. In his featured keynote of the same name, Jean shared with the audience the secret behind finding raw musical talent in an industry flooded with artificial intelligence.

Before delving into the conversation, Jean couldn’t help but comment on the many college students sitting in the audience, who he said looked drained from today’s pressures faced as young adults.

“How Uncle Wyclef look fresh as hell at 49?” Jean said. “Y’all supposed to be swaggy. Y’all look dead, man. Is this what it is?”

To begin the hour-long discussion, Jean told audience members the story behind his latest project Wyclef Goes Back to School. After teaching multiple masterclasses at student music programs across the United States, the former Fugees member decided to give students a platform to showcase their raw talent.

In this day and age, Jean said the large amount of talent present in students’ first and second years of college is lost in data and analytics.

“If you can pass the stage of hype, you’re dealing with raw talent,” Jean said. “There has to be a side of the music industry that’s focusing on passion.”

For Jean, the key to finding such talent is maintaining in person connections. Jean then left his seat to approach a member of the audience, to show the importance of physical interaction when sharing ideas in the music industry.

“No matter how many files we transfer through Dropbox or different forms, there’s nothing that can beat the idea of the human being within the present,” Jean said. “Humans have another frequency.”

Despite multiple changes technology has made to the music production process, Jean still believes collaboration between different generations of artists is possible. To provide an example, Jean shared a story of his work with late Swedish artist Avicii to produce the platinum hit “Wake Me Up.” Though Jean and Avicii used guitar and technology, respectively, as their musical approach, Jean said the song itself was all that mattered.

“The idea of the songwriter will always be boss,” Jean said. “You never chase sonics. You never chase a fad. All you have to do is write a great song.”

Jean’s featured session was as much a life lesson as it was a showcase for student talent. The three-time Grammy award-winning artist brought many featuring artists on his latest project to perform. Student performances ranged from an acapella rendition of Chris Brown and rapper Busta Rhymes’ verses in “Look at Me Now” to supporting violin and vocals for Jean’s 2000 record “911.”

“When you put a lot of talent together, the amount of collaborations and records that you’re going to get, the amazement, the product you’re gonna get, I don’t think that can be put together with AI,” Jean said.

As elders, Jean believes that it’s his generation’s responsibility to teach as well as listen to emerging artists about music. Comparing their retention of information to sponges, Jean is hopeful for the next generation of artists.

“Kids learn, and then later, they absorb it, they sponge (the information),“ Jean said. “We as elders have to do more homework.”