After resounding win, Texas pitching staff battered by No. 6 Tennessee 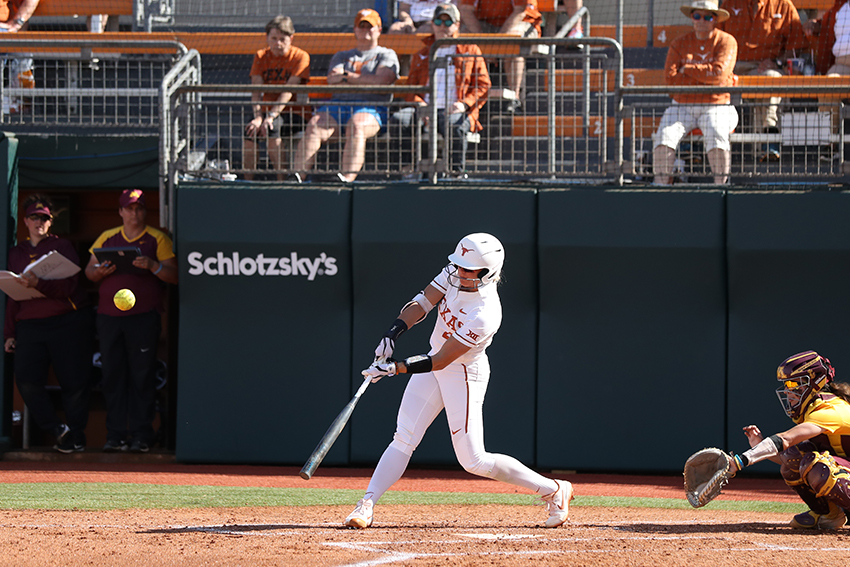 On a day that saw Texas play 10–13 BYU and No. 6 Tennessee, the story of Saturday’s two matchups proved a story line the team has displayed this whole season: the Longhorns have yet to get over the hump.

The dichotomy of the day’s two games perfectly shows what the Longhorns have struggled with. They have easily handled unranked opponents, yet had problems with stronger ones.

A 14-0 game against BYU kept the trend of beating unranked teams alive. Pitcher Shea O’Leary, who has slowly become an ace on this pitching staff, threw yet another shutout, giving up just four hits. O’Leary has now given up three earned runs in 48.2 innings of work, good for the fourth-best ERA in the country.

“We did a really great job hitting the ball against BYU, it was an explosive offense,” Texas head coach Mike White said. “And Shea did another great job pitching out of some jams early on, especially in that first inning.”

Texas scored the second-most runs of this year in large part due to the play of leadoff hitter Reagan Hathaway. Hathaway hit the second pitch of the game over the wall in dead center, then singled in the second inning to knock in two RBI on the day as the Longhorns scored in every inning.

Yet, game two was an entirely different story. It was a rough start on the mound for pitcher Miranda Elish against a Tennessee lineup with a lot of firepower. Elish lasted just 2.2 innings as she gave up five runs on five hits. Brooke Bolinger came into the game in relief and had problems with her command, walking five hitters and giving up three runs in her two innings of work.

“The walks just killed us. We know that’s a pitcher’s error, and we had way to many,” White said. “That’s what we’ve got to stop … It’s just a matter of getting out pitching back.”

It took a late rally and some major power from the Texas offense to bring this game close. Washington and Elish hit back-to-back home runs in the fourth. Then, Hathaway and catcher Mary Iakopo each hit one out in the seventh inning, giving the Longhorns their five runs. Yet it wasn’t enough, as the potent Tennessee lineup collected more timely hits with runners on base while Texas stranded seven runners on base.

The Longhorns will have a chance for redemption in Knoxville on Saturday, where they again take on BYU and the Volunteers.

“I’ll tell them tomorrow to focus on their game, and make sure we can give them an ‘A’ grade in each of the four areas (of the game),” White said. “If we can get better on (all areas of the game), we’ll start to get some of these tough games against some of these big teams.”