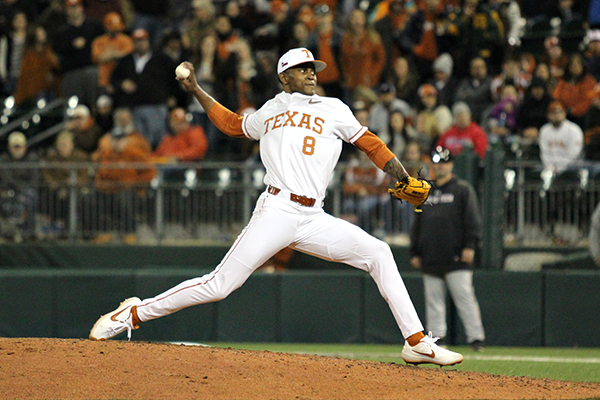 What more could be asked from the baseball gods other than a matchup between top-15 in-state rivals coming down to the wire?

That was exactly the case Friday night in No. 12 Texas’ 4-3 come-from-behind victory over No. 11 Texas Tech. It began Big 12 play in front of 7,460 people at UFCU Disch-Falk Field.

Texas found itself down 3-0 in the third inning after starting pitcher Bryce Elder uncharacteristically walked three straight Red Raiders with two outs and allowed two consecutive singles for those runs to cross the plate.

“(That) was a pretty crazy ballgame, to be honest,” Texas head coach David Pierce said in his postgame interview. “For Bryce to go out there with two outs and then walk three guys in a row, and then get to one of their best RBI guys, was unfortunate.”

Texas was able to scratch its way back in. With runners on second and third and two outs in the bottom of the sixth inning, the Longhorns took advantage of an error by Texas Tech’s star third baseman, Josh Jung, to take the lead.

Jung was a unanimous preseason All-American by the National Collegiate Baseball Writers Association and had just two errors coming into Friday’s contest.

With the lead, Pierce relied on the arms of relief pitchers Ty Madden and Kamron Fields to keep the Longhorns in the game and eventually seal the deal.

“They are becoming lights out guys,” Pierce said. “There’s nothing guaranteed, and they have to make quality pitches. But (they) go out there with confidence and know that if their stuff is in the (strike) zone and they locate it right, they are going to be successful.”

Fields faced the minimum of nine batters in his three innings of work and didn’t relinquish a hit or walk in the process. By the ninth inning, Fields proved he still had gas in the tank, as he touched 94 mph   , according to the stadium radar gun, and struck out the side to close out the ball game.

In total, the two relievers combined for four innings pitched, six strikeouts and didn’t allow a single Red Raider to reach base.

“Kam was ridiculous today,” designated hitter Zach Zubia said. “He went out there and said, ‘I’m just going to give you my best stuff,’ and he gave us a very gutsy performance.”

The Longhorns have nine pitchers on roster that have an earned run average below 2.00, with many of them primarily coming out of the bullpen.

“(The bullpen is) ridiculously good,” Zubia said. “I would put them up against almost anyone in the country, and I mean that wholeheartedly.”

While the beginning of Big 12 play was kind to the Longhorns, relying on the bullpen to get out of jams isn’t always the most reliable strategy.

“We can’t get too consumed in results,” Zubia said. “We’ve got to keep grinding every day. Tomorrow’s going to be a dog fight, and I think we are ready for that action.”