‘The Curse of La Llorona’ scares with its recycled horror clichés 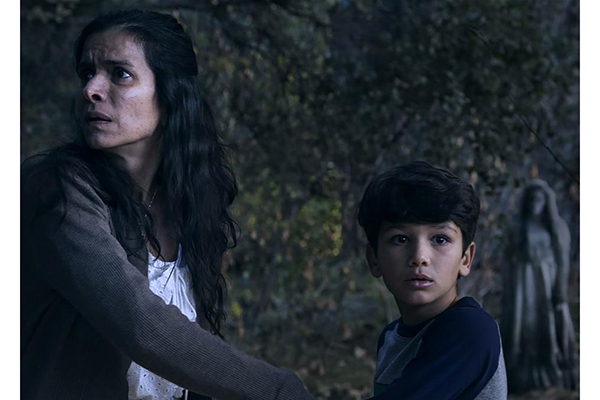 “The Curse of La Llorona” is Michael Chaves’s feature length directorial debut and another entry in the ever-growing The Conjuring Universe. The film follows a single mother as she does whatever it takes to defend her kids from the malevolent spirit of La Llorona. The film stars Linda Cardellini from “Brokeback Mountain,” Raymond Cruz, Patricia Velasquez and Marisol Ramirez.

The cast does a fair enough job with the script they are given. Cardellini fiercely portrays Anna, who will stop at nothing to protect her children. Her desperation and love for her kids is every evident, although some of her lines do come out a bit flat and uninspired. Cruz is a strong side character within the film. His dry humor and confidence play off of the leading cast quite well. It’s a shame his character is pretty much only a plot device to offer spiritual protection to the protagonists. Velasquez brings life to Patricia Alvarez with a paranoid and grief-filled performance. Velasquez’s physical and facial performance really adds to the believability of her crippling outlook on reality. Marisol Ramirez is a force to be reckoned with as La Llorona. Her face, in combination with makeup and effects, is pure nightmare fuel. Ramirez conveys pure hatred and terror with her menacing facial expressions.

Michael Chaves does an efficient job at directing his first feature. He certainly knows how to build tension and expertly integrates scares into the environment. One particular scene involves the title character blending in with curtains, only to reveal herself to the audience’s surprise. Chaves uses shadows and mirrors to eerily depict La Llorona. Unfortunately, he leans a little too hard on jump scares, and the film ends up being as effective as a carnival haunted house. The most spine tingling moments are when the viewer is allowed to soak in La Llorona’s menacing appearance. Unfortunately, the iconic spirit usually just screams for five seconds and then throws someone through the air. It gets old very fast and is certainly not an original idea.

The cinematography follows the “The Conjuring” films’ sleek blue tones and grounded style. The shots don’t get as creative as they should and the film is often visually bland. It doesn’t help that instead of shooting the film in a vibrant place like Mexico — where the legend reportedly originated —  the film takes place in a suburban L.A. town in the 70s. It’s not very visually pleasing and drains the personality from the film.

The main issue with “The Curse of La Llorona” is it’s a tried-and-true story. The main plot of this film has been done so many times before. The movie is a generic ghost story that replaces random ghost No. 3 with the legendary La Llorona. The family in the film gets attacked by a spirit, no one really believes them about it, they contact the church and then finally someone comes over to protect them using incantations and crosses. With so many unique voices in horror today, it's a shame that screenwriters are recycling the same type of overdone story. The film also seems to lack a sense of pacing. La Llorona is visibly seen within the first act of the film, something that may have been better to keep shrouded in mystery until a rewarding reveal.

Overall, “The Curse of La Llorona” is another entry in the ever-growing catalog of cliché films that feature ghosts. Although the film sports decent performances and some effective suspense, it ultimately falls victim to an obscene amount of unoriginal storytelling and jump scares.