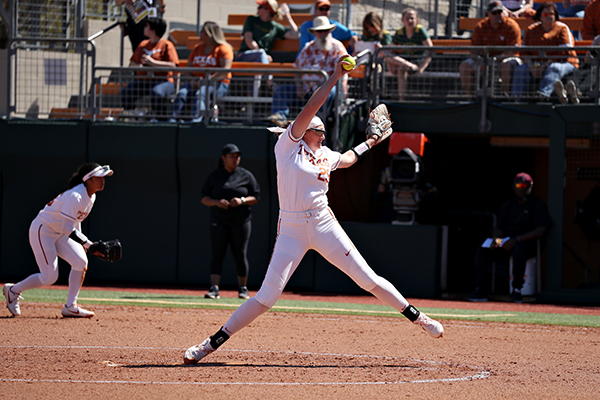 The start of pitcher Shea O’Leary’s collegiate softball career had been a breeze. The freshman allowed just three runs in her 55.2 innings of work before conference play.

Yet, in what was her first big mental test, O’Leary passed with flying colors throwing a complete game in Texas’ 6-1 home win over Iowa State on Saturday.

O’Leary got herself into trouble several times in the early goings. In the second inning, the first two Iowa State hitters came out with doubles, giving the Cyclones an early lead. After a walk, O’Leary got out of a two-on, no-out jam with three straight groundouts to end the inning.

Iowa State threatened again in the fourth putting its first two runners on, but O’Leary worked around it by inducing an inning-ending double play.

“It was definitely a little nerve wracking,” O’Leary said. “I just tried to stay calm out there and know that my defense would have my back, and if they did score, my offense would have me too.”

O’Leary’s saving grace was her breaking ball. It kept hitters off balance, and while she only struck out one hitter, the offspeed pitch helped induce plenty of weakly hit balls.

“That was the difference-maker there,” Texas head coach Mike White said. “They were coming down and swinging at a lot of first pitches because they figured she’s around the strike zone. She was able to mix it up with the offspeed and keep them guessing a little bit. That was a big difference.”

For the Texas offense, it was a big fourth-inning rally that was the difference. It started with a two-out RBI single from third baseman Shannon Rhodes. Then, outfielder Kaitlyn Washington blasted a two RBI double down the line in right. Outfielder Bekah Alcozer was the one who broke the game wide open, hitting a moonshot of a home run to dead-center field.

“We just keep building and building, and it just happens to happen in the fourth inning,” Alcozer said.

The Longhorns have now outscored opponents 72-8 in the fourth inning this season, a phenomenon that could not even be entirely explained by the head coach.

“I think they’re making adjustments pretty well at the plate,” White said. “It’s one of those deals that you don’t ask questions — you’ve just got to hope it continues.”

Whatever the case, these fourth-inning rallies have propelled a Texas offense that is consistently putting up big numbers this season. In Sunday’s series finale against Iowa State, the Longhorns will look for more of the same as they try for a sweep to start conference play.