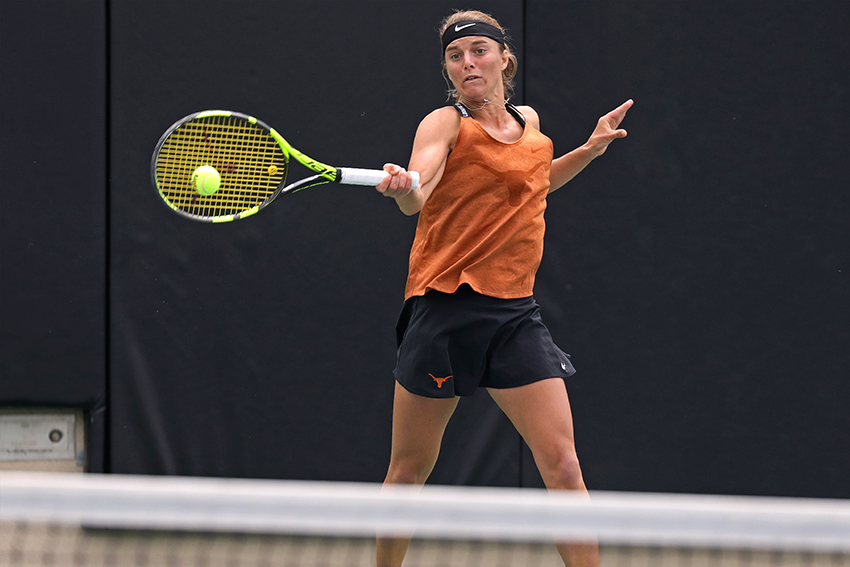 Bianca Turati brought the Texas Tennis Center to their feet Sunday as she helped the Longhorns escape the jaws of defeat.

The visiting Kansas Jayhawks presented a huge challenge after winning three out of their last four matches, giving the match all the ingredients for a Big 12 nail-biter.

“Everyone on our schedule is a fine team, but we knew this was one of the better teams in the country and the conference,” Texas head coach Howard Joffe said. “Everyone had to perform well and fight hard.”

The Jayhawks didn’t let the Texas’ 2–1 away record phase them, striking the first blow with the doubles point. Maria Toran Ribes and Malkia Ngounoue came charging out of the gate by defeating Fernanda Labraña and Bojana Markovic 6-0.

Then, despite sharp play from Petra Granic and Tijana Spasojevic early, a quick recovery from Janet Koch and Nina Khmelnitckaia caused the game to slip away, resulting in a final score of 6-3.

However, the Longhorns remained composed as Granic quickly energized the Longhorns with her sixth consecutive victory in dual-match singles play. Granic overwhelmed Ploburng Pilpuech, 6-1, in her first set and again in a 6-3 win which tied the match.

Katie Poluta turned the energy of the match back towards Texas. Poluta improved to 7–1 in dual-match singles play, beating Maria Toran Ribes, 6-1, in her first set, powering through a difficult second set 7-5.

Anna Turati carried momentum into her match with a third singles victory in straight sets. Turati held off Koch, who led early but failed to sustain her pace, falling 6-3. Koch continued to battle in the second set but fell again, this time 6-4.

The Jayhawks refused to lie down, though as Khleminickaia revitalized Kansas with a three-set thriller over Markovic, 6-4, 2-6, 6-2.

This meant the fate of this match would ride on the shoulders of Bianca. Bianca’s task was amplified by the fact that she was facing one of the best players in the nation, Anastasia Rychagova.

Bianca raced to an early 6-0 lead in the first set. Rychagova then countered with a 6-3 victory in the second set, setting the stage for a showdown in the final set to determine the match. Bianca easily took the third set for Texas, 6-1, sealing another victory for the Longhorns.

“I did a good job fighting back in the third set,” Turati said. “I got my mentality back to where I was fighting for every ball. The crowd and my teammates surely helped me every point. They were screaming with me, which annoyed my opponent. It was working well, so every point I was trying to get some power for the people.”