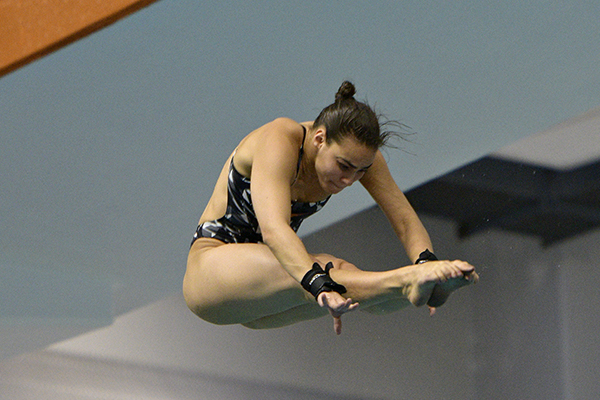 The Texas women’s swimming and diving team concluded its 2018-19 season over the weekend with a strong showing in the NCAA Championships.

The Longhorns did not unseat defending champion Stanford, but still managed to amass an impressive 190.5 team points over the course of the meet — good for a fifth place overall finish.

Headlining Texas’s performance over the final two days was diver Murphy Bromberg. The sixth-year senior put forth her squad’s only medal-winning performance, taking gold in platform diving with a score of 391.60.

“I can’t imagine a better way to have finished my collegiate career,” Bromberg said. “It’s been a long road, but I’m so happy for every moment. I love this team and I’m proud to be a Longhorn.”

For Bromberg, her performance was an exclamation point on a historic career. The now four-time All-American previously placed highly at nationals in 2014, 2015 and 2017, but had not managed a first-place finish until Saturday evening in her final event as a Longhorn.

Also impressing was the 400 freestyle relay team. The quartet of Claire Adams, Brooke Hansen, Anelise Diener and Julia Cook catapulted Texas from ninth to fifth in the final standings with their fourth-place mark of 3:10:89 in the meet’s concluding event.

Relays were a particularly strong point for Texas for the duration of the meet. Of the five relay groups which competed for Texas — the 800 freestyle, 200 freestyle, 400 medley, 200 medley and 400 freestyle — each one succeeded in advancing past the preliminary round.

In individual races, Evie Pfeifer merited praise for her performance as well. The sophomore placed seventh in Thursday’s 500 freestyle before notching a 13th place finish in Saturday’s 1650 freestyle.

This year marks the third consecutive season in which Texas has finished in the top six nationally at the NCAA Championships.