Hi, How Are You Project inspired by famous frog mural on Guad to encourage mental health discussions 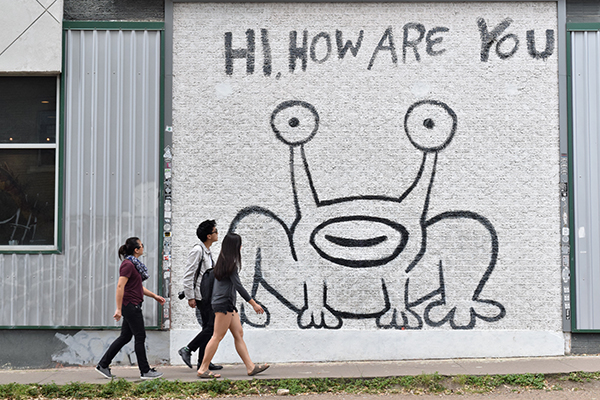 The iconic “Hi, How Are You” mural, located on the corner of Guadalupe Street and 21st Street, was created by artist Daniel Johnston in 1993.

In fall 2017, Courtney Blanton and Tom Gimbel founded the Hi, How Are You Project after being inspired by the widely recognized words of the mural. The Johnston family is also involved in the nonprofit organization, which focuses on promoting conversations about mental health issues.

UT alumna Blanton said she has dealt with anxiety and depression and has had open conversations with others who also have mental health struggles.

“(Gimbel) was really inspired by my story and being open to talk about what I deal with, and we decided to start the foundation,” Blanton said.

Johnston said he has had manic depression and schizophrenia for the majority of his adult life and throughout his career.

“Not only (is) the ‘Hi, How Are You’ mural recognized and loved by so many people in Austin, but (Johnston is) also an inspiration himself for what he’s overcome and how he’s been successful in his art given his struggles,” Gimbel said.

Mayor Steve Adler proclaimed Jan. 22 to be the official Hi, How Are You Day in Austin. Blanton said this day is meant for checking in with neighbors and loved ones. In addition, the foundation has thrown events such as concerts and fundraisers — including a partnership with Vans shoes — to promote the message of the project.

American Campus Communities, the company that currently owns the property on which the mural is located, will also be working with the Hi, How Are You Project to help preserve what the mural represents and to encourage mental health talk among students around campus.

“While we do plan on redeveloping the site in the future, the existing wall will be preserved in its current state and will be protected throughout construction,” said Gina Cowart, vice president of marketing communications and brand strategy for American Campus.

Gimbel said the mural reflects the ideals of their project.

“Those four words are the perfect conversation starter to encourage people to talk with one another and to really want to know how someone else is doing,” Gimbel said. “Say ‘Hi, How Are You,’ and mean it.”