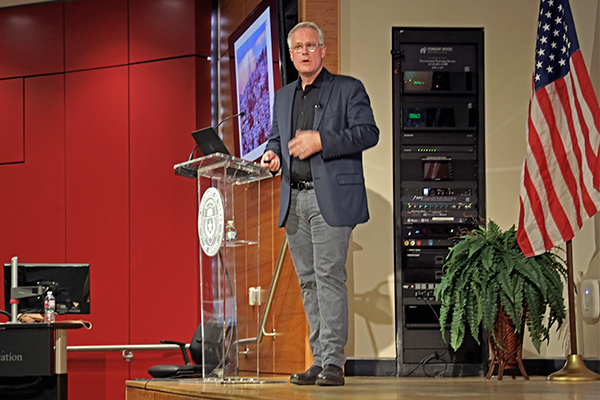 Pulitzer Prize-winning photojournalist and UT alumnus John Moore spoke on campus Monday evening about his experiences in photojournalism as well as his new book “Undocumented.”

Moore is a special correspondent for Getty Images and has taken photos in more than 70 countries across six continents. Shortly after graduating from UT, Moore started working in Central America. He later photographed places such as South Asia, Africa and the Middle East, and covered the assassination of Benazir Bhutto, the former prime minister of Pakistan.

Amarachi Ngwakwe, a health and society senior, said she attended the talk because she enjoys photography.

“I think the reason UT gets individuals like John Moore to come speak to students is to expose students to fields they’re interested in, and I’m very grateful for that,” Ngwakwe said.

Since 2010, Moore has centered his career around undocumented immigration in the U.S., photographing the southern border in its entirety and traveling to countries where a large number of immigrants come from to figure out why people make the journey to the U.S.

In June 2018, Moore took a picture of a two-year-old girl crying as her mother was searched by a U.S. border patrol agent. This photo went viral and was used as a symbol of the trauma of families seeking asylum in the U.S.

Moore said the night Donald Trump won the presidency, he decided he should put his work into book form.

“It occurred to me on election night that it would be a successful book because there were so many Americans interested on the issue of immigration from all sides,” Moore said.

Published in 2018, “Undocumented” focuses on many aspects of immigration including why people leave their home countries to come to the U.S., the ways people come to the U.S., border security and how undocumented immigrants live once they’ve successfully crossed the border.

Moore said the main reason undocumented people flee to the U.S. is to escape poverty and violence in their home countries. He showed a picture he took of a mother massaging her son who had a severe spinal condition. Her husband, Moore said, went to the U.S. to make enough money to pay for their son’s surgery.

“I liked how he talked about all sides of the immigration story and put them all together,” Silva said.