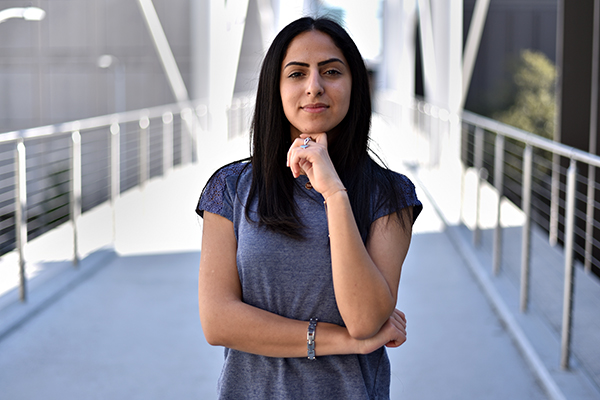 Shaimaa Khodr, a University of North Texas interior design junior, came to the United States from Lebanon on a student visa in 2014. Feeling homesick, she discovered iarabFM in 2017, an app built to represent the Arab community in America, and reconnected with her culture.

“We’re trying to make it a media (group) that covers and focuses on the (Arab) community,” said Mahrouq.

After moving from Saudi Arabia in 2015, Mahrouq said representing the Arab community has been on her agenda since arriving in the U.S.

Noticing the lack of Arab representation in American media, Mahrouq said she decided to study journalism and create a space of her own, rather than work for an existing company.

“I wanted to also focus on the youth because we are in the generation where we are integrating a lot with American culture,” Mahrouq said. “I want (Arab-Americans) to remember they have another culture.”

Ahmad Salah, media marketing and producer at iarabFM, said another focal point is the upcoming 2020 elections. iarabFM hopes to engage the Arab community by providing news coverage and alerts to politicians’ upcoming events.

“We, as Arabs, are part of this community,” Salah said. “We have to support and tell politicians exactly what we want so they can help us.”

After seeing different cultures reporting on the 2016 elections, Mahrouq saw the impact the coverage had on her community and said she wants to use her platform to encourage young Arab-Americans to vote.

“I was raised in Saudi Arabia and never knew the importance of our voice to the government,” Mahrouq said. “It’s amazing to learn how the government works, but you have to represent yourself for (that to happen).”

In order to reach all members of their community and educate those outside of it, iarabFM plays some shows in Arabic and some in English depending on the subject matter.

“Some shows are English-based because there are some Arabs who don’t understand Arabic, and we don’t want to make them feel like they have nothing to represent them,” Mahrouq said.

With listeners in over 39 countries, iarabFM also covers events outside of the U.S. that are relevant to the global Arab community.

After the New Zealand mosque shootings in March 2019, Khodr said iarabFM announced an event in Dallas where the mayor planned to speak about the attacks.

“It wasn’t all the old-school Arabs,” Khodr said. “It was interesting that there were Christians, Jews and different religions (at the event).”

Mahrouq said publicizing the various communities supporting the Muslim community through iarabFM was her way of conveying support for New Zealand users.

“Even if you’re not Muslim, you should be there, and I’m very grateful how (everyone) came to show support,” Mahrouq said. “I believe this is what America is built for.”

As a Muslim and an Arab, Mahrouq said supporting the community is personal because tragedies, like the shooting, can happen to anyone, including her family members who pray at their mosque on Fridays.

“I show support because, at the end of the day, this is my community,” Mahrouq said. “These are Arabs.”